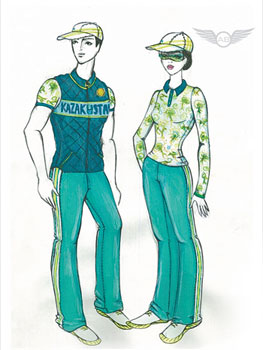 ASTANA – The designs of Aizhan Bokayeva and her brand Ayoko Bo were chosen on May 30 as the official uniforms for Kazakhstan athletes at the Sochi Olympics.

Following the results of international voting, which began on May 28, Bokayeva’s designs received the maximum number of votes at 952. That was only two more votes than the second-place winner, Almaty-based company KAZSPO-N. Third place went to designer Thais Dow Guang Zhou who received 296 votes.

The winner Bokayeva called her mother her chief assistant. Her mother “turned upside down” all of Kazakhstan and contacted friends from all over the world to ask them to vote for her daughter, Bokayeva said. “Now I know what presidents experience during pre-election campaigns,” the winner said.

The competition began on May 14, and during its two-week run, 19 applicants fought for the right to dress Kazakhstan’s Olympic delegation in their uniform design. After the first stage, three competitors made their way to the final, including fashion house Ayoko Bo, the KAZSPO-N company and young designer Thais Dow Guang Zhou.

Prior to that, at a press conference held May 28 upon completion of the first stage of competition, it was announced by official representative of Kazakhstan’s Agency for Physical Culture and Sports Dias Akhmetsharip that Kazakhstan plans to spend around $3,300 per Olympic uniform.

“Around 370 thousand tenge ($2,444) was spent on production of one unit of uniform for the Olympic Games in Vancouver. We plan to increase the amount up to 500 thousand tenge ($3,314) for the production of the uniforms for Sochi 2014. We will not only spend budget funds but also will attract sponsors,” he said. According to Akhmetsharip, a total of 150 uniforms will be produced.

Now that the design has been chosen, the next step is to organize a competition to choose a company to produce the uniforms. Officials believe that not only Kazakhstan’s companies, but also world brands such as Adidas, Nike, Asics, Lotto will be engaged in the process.