ASTANA – On June 4, the “Our Flag! Our Emblem! Our Anthem!” campaign to celebrate the Day of State Symbols of Kazakhstan took place across the country and celebrations, including simultaneous performances of the national anthem both across Kazakhstan and internationally, were held in honour of the holiday. 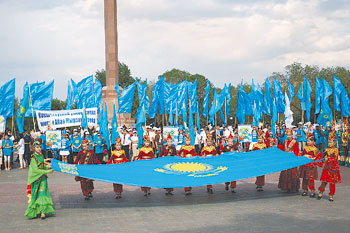 Large scale celebrations were held across the country to commemorate the Day of State Symbols of Kazakhstan.

The sixth national forum of patriots, “My Kazakhstan!” organised with the support of the Ministry of Culture and Information took place in Atyrau on June 3-4 as part of the celebrations. Minister of Culture and Information Mukhtar Kul-Mukhammed, parliament members, authors of state symbols, representatives of the president’s executive office, central and local executive bodies, the People’s Assembly of Kazakhstan and nongovernmental and youth organisations took part in the forum. Kul-Mukhammed read an address from the president in which he emphasised that the state symbols show the unity of all the country’s citizens and that the flag, emblem and national anthem are sacred and important visual attributes of the nation’s independence.

Representatives of NGOs, creative and scientific intellectuals, youth, mass media, war and labour veterans, soldiers and athletes participated in the forum, representing all regions of Kazakhstan. The main event was the annual ceremony honouring the Patriot of the Year. Traditionally, outstanding athletes, distinguished artists, people who have reached the tops in their profession, scientists, innovators, philanthropists and leaders of major social organisations in different categories have received that honour.

A large-scale youth and patriotic campaign, “My Kazakhstan! My Astana!,” was held in Astana as part of the Day of State Symbols celebrations. More than a thousand people, including students of higher educational institutions and colleges, representatives of youth organisations and the creative elite, Bolashak programme scholars and Olympic champions took part in it. Participants of this campaign organised a simultaneous international performance of Kazakhstan’s national anthem in Astana, London, Washington, Moscow and Shanghai. A screen in Astana broadcast the event.

At the Ministry of Internal Affairs, across all military units, the best of the best had an opportunity to raise the National Flag of Kazakhstan.

In 1992, the new state symbols of independent Kazakhstan were first approved. These symbols have great significance in the country as tokens of nationhood and independence.

The blue flag, designed by Shaken Niyazbekov, reflects the pure sky and represents peace and prosperity. The sun on the flag is a representation of life, energy and openness; the soaring steppe eagle illustrates the power and sovereignty of the state and its high aspirations. The vertical band with the national ornamental patterns and the national ornaments along the flagstaff represent the art and cultural traditions of the Kazakh people.

The authors of the state emblem are famous Kazakh architects Zhandarbek Malibekov and Shot-Aman Ualikhanov. The state emblem has the shape of a circle or wheel, a symbol of life and eternity that was especially valued among the nomads of the Great Steppes. The image of shanyrak, the round closure at the top of a yurt, in the centre of the state emblem symbolises the peoples’ common homeland. The horse stands for bravery; the wings, the dream of the multinational people of Kazakhstan to build a strong and prosperous nation. The star reflects the dream of building a state open to all countries of the world for cooperation and partnership. Its primary colour, gold, serves as a symbol of wealth, justice and magnanimity.

In the history of independent Kazakhstan, a national anthem as been adopted twice, in 1992 and in 2006. The latest version of the anthem, based on the patriotic song “Menyn Kazakhstanym” (My Kazakhstan) written in 1956 by Shamshi Kaldayakov and Zhumeken Nazhimedenov, is popular among the people. President Nursultan Nazarbayev has contributed to modifying the original lyrics of the song.

In 2012, President Nazarbayev signed the law, “On Amendments and Additions to Legislative Acts of the Republic of Kazakhstan on the Issues of State Symbols.” The purpose of the law is to strengthen responsibility for adhering to the legislation on state symbols.