By Gulnaz Kalikhanova in People on 12 June 2013

ASTANA – This year, Kazakhstan celebrates the 120th anniversary of the birth of Nazir Turekulov, one of Kazakhstan’s greatest sons. Turekulov was an outstanding diplomat, statesman and scholar of Asian cultures. 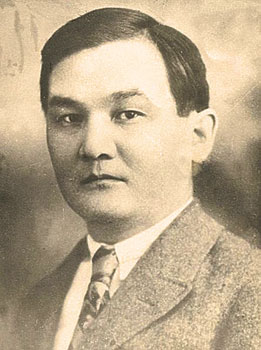 On June 7, the Ministry of Foreign Affairs hosted an international conference dedicated to the life and work of this prominent figure. The event brought together a wide range of the public, including Kazakhstan’s statesmen and public figures, scholars from Russia and Uzbekistan, foreign diplomats, as well as faculty members and students from Astana and Almaty universities.

The Minister of Foreign Affairs, Erlan Idrissov, and Secretary General of the Eurasian Economic Community, Tair Mansurov, who is also the author of eight books on Turekulov, attended the conference.

In his opening remarks, Idrissov highlighted the importance of the event in teaching the younger generation about Turekulov’s enormous contribution to Kazakhstan’s history.

“I hope that the extraordinary work and bright life of Turekulov will set an example for today’s diplomats and the younger generation,” he said.

Participants received a congratulatory message from Kazakhstan’s Secretary of State, Marat Tazhin, in which he expressed confidence that the discussions at the conference would contribute to “the reconstruction of a true picture of the past and impartial interpretation of historical events that reveal the many sides to the personality of Turekulov.”

Turekulov was the first Soviet plenipotentiary representative, a term used by the USSR for its ambassadors in 1920s-1930s, in the Arab world and played an important role in establishing friendly relations between the Soviet Union and Saudi Arabia.

According to Idrissov, Turekulov’s outstanding personality and talents allowed Soviet authorities to take a decision about his appointment in Saudi Arabia without hesitation. Idrissov read the comprehensive description then Soviet Foreign Minister Georgy Chicherin gave concerning Turekulov’s personality at the time, “Only Nazir Turekulov, the current chairman of Central Publishing of the USSR, can fully implement the state policy in the Arab world. The outstanding talent of Turekulov will allow him observe the Muslim world from Morocco to Indonesia. His intellectual capacity and knowledge of the Muslim world and outlook make us confident in his ability to fully perform the functions of the Soviet Ambassador.”

The conference programme included a plenary session and two breakout sessions, entitled “Turekulov – a prominent Kazakh diplomat” and “Turekulov – a statesman and orientalist.” More than 50 scholarly papers were presented during the sessions.

In addition, the participants were shown a documentary film and a comprehensive photo exhibition. The conference concluded with the adoption of a resolution with recommendations to Kazakhstan’s relevant state bodies on measures to promote Turekulov’s heritage.

All of the conference’s participants spoke about Turekulov with great pride. The Soviet civil servant, brilliant diplomat, journalist and essayist, Turekulov, lived a life full of events. Unfortunately, it ended abruptly in 1937 when he fell victim to political repression under Joseph Stalin.

Turekulov was born in 1892 to the wealthy family of a Kazakh cotton merchant in the city of Kokand, present day Uzbekistan. “The diverse education he received in his childhood coupled with his outstanding personality characteristics, such as an inquisitive mind, determination and irrepressible energy all pointed to the fact that he would live a life full of bright achievements,” Mansurov wrote in one of his books.

Turekulov received his education first in Kokand and then Moscow, where he attended the Moscow Commerce Institute, presently called the Russian Economic University named after Plekhanov, starting from 1914. Despite the First World War, he managed to complete three years. During that time, he began to engage in political activity, which he continued to do after returning to Kokand in 1918. While in Uzbekistan, he held several government positions in Tashkent. From 1923 to 1928, he worked in civil service in Moscow. On Nov. 24, 1927, the Soviet authorities made a decision to appoint him as a plenipotentiary representative to Hejaz, the province of what would become the united Saudi Arabia.

The most brilliant period of Turekulov’s life and work began there, in the Arab world, where his organizational and diplomatic skills were fully revealed. According to Mansurov, for eight years Turekulov worked in harsh climatic conditions and in an atmosphere of political tension. Thanks to his titanic efforts, the Soviet Union and Saudi Arabia formed normal partnership relations, which later evolved into the category of strategic cooperation. His greatest achievements included the export of Soviet oil to Saudi Arabia, Prince Faisal’s visit to the USSR, setting up phone communications and other significant developments.

Turekulov was able to quickly establish trusting relationships with the local political establishment. Shortly after his arrival in 1929, the Saudi government announced their agreement to transform the diplomatic agency of the USSR in Jeddah into a diplomatic mission.

On Aug. 2, 1931, with the participation of Turekulov and Prince Faisal, the two countries signed an agreement for the delivery of Soviet gasoline and kerosene worth 150,000 dollars as a loan. Nazir Turekulov then personally supervised the implementation of this petroleum deal.

In May 1932, the Saudi delegation headed by Prince Faisal paid an official ten-day visit to Moscow. “This visit can be considered one of the major political achievements of Nazir Turekulov. Both sides took the visit very seriously. Moscow knew that it would welcome not just a son of the Saudi monarch, a seventeen-year-old boy, but the heir, the future king of the friendly country,” Mansurov wrote. The official part of the visit was complimented by an extensive cultural programme. The delegation was always accompanied by prominent figures of the USSR.

During a visit to a telephone factory in Leningrad, the Soviet side gave Prince Faisal an automatic telephone exchange system, which was a technical novelty at that time. Later, with the support of Turekulov, the telephone exchange was installed in the residence of King Abdul Aziz Al-Saud.

While in Saudi Arabia, Turekulov quickly mastered the Arabic language,, which added to the other seven languages he already knew, including Kazakh, Russian, Uzbek, Tatar, Turkish, German and French. All of this along with his professionalism and personal charm earned him the sincere respect of the king and his family. King Abdul Aziz Al-Saud called Turekulov his brother. In addition, Turekulov developed good relationships with the king’s sons, especially Prince Faisal. The Soviet Ambassador enjoyed influence and respect among his foreign counterparts accredited in the Arab country as well and was the Dean of the Diplomatic Corps.

Turekulov respected the peculiarities of the Muslim world and the Arab East, repeatedly performing the hajj and observing local norms and traditions. He also raised from 10,000 to 15,000 the number of pilgrims who were allowed visit Mecca annually through the Soviet territory. The move was meant to produce “a very good impression and avert accusations of oppression of Islam.”

In early 1936, Turekulov was recalled to Moscow and for a year worked as a senior fellow at the Institute of Language and Literature under the Nationalities Council of the USSR. In 1937, he was arrested and shot on false charges, as were many other victims of Stalinism. This tragic news shocked Saudi King Abdul Aziz Al-Saud. Through various diplomatic channels, the king let the Soviet government understand that other envoys were not welcome in his country. Following this, the relationship between the two countries broke off and was restored only in 1990.

Turekulov’s name was cleared of all charges and his reputation was restored fully only on Jan. 28, 1958. His life story provides an interesting insight into the history of Kazakhstan and the Soviet Union in 1920s-1930s, but also serves as an important reference point for many aspiring Kazakh diplomats today.