ASTANA, June 5 – Relations between Kazakhstan and Latvia are marked by the development of close ties across numerous sectors and the June 2-4 visit to Kazakhstan by Latvian President Andris Berzins further strengthened this relationship. 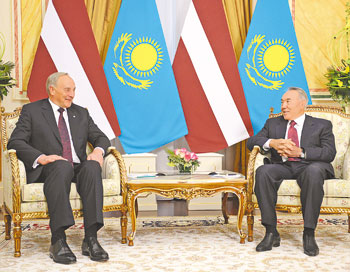 During his visit, Berzins met with Kazakhstan President Nursultan Nazarbayev, Prime Minister Serik Akhmetov and Chairman of the Mazhilis of the Parliament Nurlan Nigmatulin. Berzins also attended business forums in Astana and Almaty.

The Latvian President began his visit to Kazakhstan, however, with a June 2 trip to the Karaganda region where he opened a memorial to Latvian victims of political repression during the Soviet times and met the Latvian diaspora in the village of Spassk.

In Astana, his discussions with Kazakhstan’s leadership focused on key areas of bilateral cooperation, including economic and trade relations and prospects for transport and transit cooperation.

Speaking after his meeting with Berzins, President Nursultan Nazarbayev noted that relations between the two countries have always been marked by systemic development.

“The bilateral political dialogue between our two countries is both active and fair. We have created close ties at the level of parliaments and governments, ministries and agencies, as well as businesses and academia. The borders of our relations are increasingly expanding,” Nazarbayev said.

He also highlighted the importance of opening the memorial in Spassk. “The peoples of the two countries have always respected and supported each other. The opening of the memorial is a true sign of respect to the memory of compatriots who had been fated to live in the Kazakh steppes,” the Kazakh leader said.

Around 17,000 Latvians were deported to Kazakhstan between 1938 and 1941. During his visit to Latvia in 2006, Nazarbayev learned of 268 cases of the Latvians who were repressed in Kazakhstan during the Soviet times.

“Latvia considers Kazakhstan the most important partner in Central Asia. Over the past two decades, your country has achieved a great deal both in economic development and in other areas. It has also increased its international influence and authority. The decision to hold EXPO 2017 in Astana is proof of this fact,” the Latvian President said at a press conference following his meeting with Nazarbayev.

He also stressed the importance of opening the monument which will serve as a factor in strengthening bilateral relations.

“We remember your visit to Latvia in 2006 and welcome you at any time. Given that Riga will be the European Capital of Culture in 2014, the mutual exchange of knowledge and experience will be beneficial to both countries,” he said.

According to Berzins, Latvia intends to further deepen its political cooperation with Kazakhstan within the framework of the European Union. “We support the efforts of Kazakhstan to join the WTO (World Trade Organization) and hope the country will become a member of this organization this year.”

Kazakhstan and Latvia have established regular and productive dialogue at all levels. The two countries have a working intergovernmental commission on trade and economic cooperation. The volume of bilateral trade has increased by 50 percent over the last year and today amounts to US $350 million. The heads of state discussed the possibility of increasing the level of trade to half a billion US dollars in a short period. Kazakhstan has 138 joint ventures involving Latvian companies.

The heads of state also discussed prospects for transport and transit cooperation. “We are implementing significant projects in the transport and logistics sector. In addition, we want to establish container shipping from China through Kazakhstan to the Baltics. It can be a very promising joint venture. It is well known that the transportation of goods from the Pacific to Europe by sea takes 45 days, while rail transit through Kazakhstan will take two weeks,” Nazarbayev said.

The presidents also identified a number of new areas of cooperation beneficial for both countries.

“Adopting an intergovernmental agreement on cooperation in environmental protection will be an important step. We would like to have Latvian participation in the preparation and holding of the EXPO 2017 in Astana. We will also sign an agreement on tourism, which will lay the foundation for fruitful cooperation. Special attention will be given to the training of Kazakhstan professionals in tourism in Latvian universities,” Nazarbayev said. The Latvian president’s visit resulted in the signing of numerous education and science agreements.

The presidents also discussed international issues, in particular the situations in the Middle East and Afghanistan. They also focused on the development of integration processes under the Customs Union and the Common Economic Space between Kazakhstan, Russia, and Belarus.