ASTANA – The Embassy of the Netherlands in cooperation with the city administration of Astana held a citywide bike race on June 15 to promote healthy lifestyles and energy conservation. 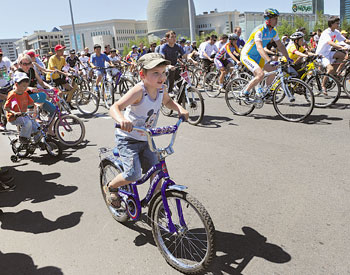 Bicycles become an increasingly popular means of transportation and recreation in Kazakhstan.

The event, which drew 150 racers and began at the Baiterek Tower, was part of the Dutch Week event, held in Astana for the second year. The Embassy of the Netherlands provided 20 bikes for participants, as well as 10 new Dutch-produced bicycles for the winners.

The event was meant to demonstrate the environmental and health advantages of bicycling to city residents. According to organizers, in the Netherlands there are two bikes per one resident and a lot of attention is paid to the health of the nation.

“I came here to take part in a bicycle race because I like sports and cycling. I am very thankful to the organizers because I was able to win a bike… In the future, I want to be as healthy and as athletic as (famous cyclist) Alexander Vinokourov,” said Danil Giller, one of the winners of the bike race.

The bicycle has become the most popular and iconic means of transportation for the Dutch. Everyone from businessmen to bankers in suits to pregnant women and children can be seen riding bikes in the Netherlands.

“Previously, China was the leader in this area, but now residents of the Netherlands are increasingly switching from cars to bicycles,” said Peter van Leeuwen, the Dutch ambassador to Kazakhstan.

“Bilateral relations between Kazakhstan and the Netherlands are developing in a positive direction. Holland holds a leading position in terms of investments into the Kazakh economy. And, in addition to a host of bilateral projects, the two countries have signed a Memorandum of Understanding in the field of energy,” the ambassador said. “I support any initiative related to the efficient use of energy, including this project. We are squandering a lot of wasted energy. According to statistics, if you use energy-saving technology, you can save more than 40 percent of what we use now,” he concluded.

The event was organized by the UNDP/GEF Project on Energy Efficiency in Municipal Heat Supply jointly with the Embassy of the Netherlands in Kazakhstan, the Ministry of Regional Development’s Committee for Construction, Housing and Utilities, the Kazakhstan Center of Modernization and Development of Housing, the Nur Otan party, the Civil Alliance of Kazakhstan and the Association of Governing, as well as private companies.