A scientific and methodical council on the preservation of the historical and cultural heritage of the region was set up on June 16 in Kyzylorda, immediately calling for the designation of the region’s Korkyt-Ata Complex as UNESCO’s World Heritage Site. 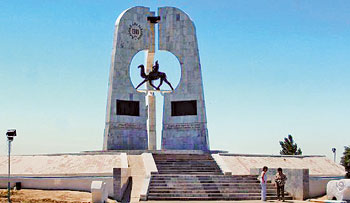 According to Akim of Kyzylorda Oblast Krymbek Kusherbayev, the Korkyt-Ata complex will be one of the most important and key sights on the international tourist routes in Kazakhstan.

Famous poet, national writer of Kazakhstan, politician and Permanent Representative of Kazakhstan to UNESCO Olzhas Suleimenov was a guest of honour at the event.

Experts from national institutions of archaeology and ethnography unanimously supported the idea of Akim (Governor) of Kyzylorda region Krymbek Kusherbayev to nominate the historical and architectural complex Korkyt-Ata for inclusion on the UNESCO World Heritage List.

For this purpose, a wide range of works, including developing a new project to expand the space for the Korkyt-Ata memorial in the Karmakshy area and reconstructing the monument, have been started in the region.

“Despite the fact that voluminous archaeological work has been conducted in the region, a unique archaeological and ethnographic system still has not been created. It is necessary to promote ancient cities, such as Syganak, Zhankent and others, with great historical value all over the world. Today, work supporting the introduction of the Korkyt-Ata complex, which is unique in the world, to the UNESCO World Heritage List, is being conducted. The complex will be one of the most important and key sights of the international tourist route,” Akim Kusherbayev said.

Honoured Architect of Kazakhstan Bek Ibrayev introduced a new draft design of the memorial. Suleimenov, the guest of honour, said that this memorial should become not only part of the cultural heritage of the Turkic world, but a part of the spiritual heritage of the entire world community.

In Kazakhstan, Korkyt is mostly known as a mythical spirit, but for the rest of the region he is also a real person: a musician and the creator of the kobyz, a traditional Kazakh stringed instrument. Korkyt is believed to have been born in the seventh or eighth century in today’s Kyzylorda region, in Yankent, the ancient capital of the Oguz people. Tombs purporting to be his are found in Kazakhstan, Turkey and Azerbaijan.

Kazakh legend about Korkyt says that when he was 20 years old, a messenger from God appeared to tell him that he would live no more than 40 years. Trying to change his destiny, Korkyt decided to seek Zheruyk, the land where people live forever, and set off riding his camel, Zhelmaya. Running away from death, Korkyt visited the four known parts of the world, and when he realised that there was no promised land, he decided to find the centre of the earth. That turned out to be the coast of the Syr-Darya river, where, according to legend, the land is connected with the cosmos.

One day, an angel appeared to him and told him how to fashion a kobyz. His playing attracted all living things, uniting all life against death. While he played, death could not take him, so he played and played. Eventually, after many days of playing, he fell asleep and death, in the form of a snake, came for him. At his request, a kobyz was put in Korkyt’s grave. The legend continues that the sound of the kobyz could be heard from under the earth at his grave site and can still be heard across the steppe.

In 1980, a monument in the form of a kobyz was erected in Kyzylorda region in honour of Korkyt-Ata.

Two manuscripts of this story in the Chagatai language were found in Germany and the Vatican in the 17th and in 18th centuries. Later, this written monument was published under the title “Kitabi Dede Korkyt” (“The Book of Korkyt-Ata”). The German scientist Friedrich Dietz translated part of the Dresden manuscript into German in 1815. In Turkey, this monument of literary culture was printed in 1916 and in Azerbaijan in 1939. The renowned Turkic-language researcher Ettore Rossi published “The Book of Korkyt-Ata” in Italian in 1952. The book was then translated into other European languages.

In Azerbaijan and Turkey, Korkyt is widely accepted as a historical figure. His 1,300th anniversary was widely celebrated in Azerbaijan in 1999.Korkyt-ata was first mentioned in the works of Chokan Valikhanov and ethnographers Abubekir Divayev, Alkei Margulan and Mukhtar Auezov.