Kazakhstan President Nursultan Nazarbayev visited the Special Economic Zone Park, known as the Park of Innovation Technologies, near Almaty and got acquainted and with the production processes of the zone’s enterprises. 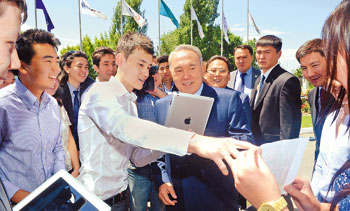 Young IT experts presented their ideas to President Nazarbayev on a recent visit to the Alatau Park of Innovation Technologies.

President Nazarbayev saw the presentations of projects of the second stage of development of the park implemented by such companies and organizations as SAT&Co, KBTU, Kazakhstan Temir Zholy National Company and Hewlett-Packard.

Deputy Prime Minister, Minister of Industry and New Technologies Asset Issekeshev also presented a report on the work recently conducted and briefed the president on development plans for the Special Economic Zone.

“We are currently working on a new law on the park of innovation technologies, which will allow it to work in automated mode involving tax privileges and the preparation of platforms and infrastructure,” the president emphasized. Nazarbayev also noted that about 7.5 billion tenge was invested in the first stage of Special Economic Zone. Around 3 billion tenge was allocated for the second stage of infrastructure construction.

During the meeting, Nazarbayev was briefed on a number of innovative projects involving 100 percent Kazakhstan content, as well as a number of joint projects developed by domestic companies and world leading companies.

In particular, he was shown a demonstration of technology dealing with three-dimensional video developed by SAT&Co and a joint project of Kazakhstan Temir Zholy and Hewlett-Packard.

The president also instructed Akim (Mayor) of the Almaty region Ansar Musakhanov to consider the issue regarding the return of idle territories to the state for their further allocation for the use of the Special Economic Zone.

“The point is that while we are adopting foreign experience, we have already fallen behind. Even the use of the most modern foreign equipment does not predetermine our own breakthrough. We need to be oriented toward creating something new that can be used here and that we can offer the world,” the president stressed.

The head of state also reiterated the instructions given during the 26th session of the Foreign Investors Council in late May. In particular, the president gave instructions to accelerate the process of building a special venture fund financing promising innovation projects.

“Competitiveness is not achi­eved by words. There must be actions. The funds are needed for the development of innovations,” Nazarbayev noted.

After the meeting, the president met with graduates of International Information Technologies University who presented their graduation projects. Expert Shows the Way Forward for Kazakhstan’s Startups.