By Gulnaz Kalikhanova in Business on 26 June 2013

ASTANA, June 18 – Kazakhstan is putting in its best efforts to ensure the continuing improvement of its business and investment climate. The establishment of a task force on the protection of rights of foreign investors, the so-called “investment ombudsman”, is the most recent example of those efforts. And on June 17, the Kazakhstan Ministry of Foreign Affairs hosted a roundtable discussion examining the activities of the investment ombudsman. 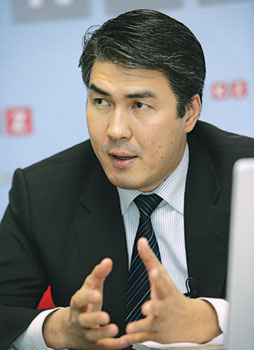 Senior representatives of state bodies, business associations, diplomatic missions and international organizations attended the event, which included discussions on issues such as identifying violations of investors’ rights, coordination among government bodies in considering investors’ appeals, solving disputes between investors, as well as state bodies and investors, and other issues of interest to foreign investors.

Ambassador of the Netherlands to Kazakhstan Peter Van Leeuwen, Ambassador and Head of European Union Delegation Aurelia Bouchez and American Chamber of Commerce in Kazakhstan Executive Director Doris Bradbury were also among the speakers. (See guest commentaries by Peter van Leeuwen and Aurelia Bouchez on Page A7.)

“The creation of the investment ombudsman institution will allow us to introduce a systematic approach to resolving the problems of our investors who are already working in Kazakhstan,” Issekeshev said.

“According to statistics, about 65 percent of new investment comes from investors who already have holdings in Kazakhstan. That being said, quick responses to emerging problems and their solutions will promote the growth of the share of reinvesting among the companies working in our market,” he said.

Since gaining independence, Kazakhstan has attracted US$171 billion in foreign direct investment, 48 percent of which or US$81.6 billion, has been invested in the last four years, Issekeshev said.

Kazakhstan is currently working on more than 400 initiatives of foreign investors from 80 countries. More than 80 of those initiatives worth approximately $10 billion have been implemented.

In his remarks at the event, Foreign Minister Idrissov said that the “investment ombudsman is designed to protect the rights of foreign and domestic investors and create favourable conditions for them in our country, which today ranks 49th in the World Bank’s Doing Business rating.” He also highlighted the importance of the issues raised at the roundtable and said the event itself was an effective platform to address existing problems.

Having shared the Dutch experience in attracting foreign investment, Peter van Leeuwen said, “We have to realize that the most important issue remains a change in mentality; this is always the biggest challenge, because the human nature is prone to stubbornness.”

“The Dutch have an expression “The farmer doesn’t like what he doesn’t know”. We have something with farmers and farming, but this is not only applicable to farmers, but very much to anybody. To overcome this, we need a learning process. Investors want to feel comfortable and at ease. It is important to realize that to attract them, you need to serve. To provide adequate services and to have real policy implementation are the main and most important challenges,” van Leeuwen added.

“We are pleased to note that the institution of Investment Ombudsman is to be established under the authority of the Deputy Prime Minister. We note also the intended close contacts with public and private actors, including local authorities, and the planned structure of its supporting administration,” added Bouchez. She called the creation of an investment ombudsman to seek an early resolution of problems “a major step forward.”

In general, the speakers noted that the establishment of the investment ombudsman is an important step for ensuring a continuing positive climate for business and investment.

The investment ombudsman held its first sitting on June 18 in Astana and plans to meet quarterly. According to the deputy prime minister, the institution was established on April 16 and was based on international best practices, in particular on the successful experience of South Korea where this institution had been functioning since 1999 and helped resolve all 4,500 complaints between 2000 and 2012 without any one of them reaching the courts.

“Any investor or embassy will be able to appeal to the investment ombudsman on specific issues and problems and file requests both through the Secretariat, located at the Investment Committee of the Ministry of Industry and New Technologies, and the Investors’ Support Center in KAZNEX INVEST,” the deputy prime minister said at the roundtable.

A working body of this task force will be the National Agency for Export and Investments KAZNEX INVEST, which is a part of the structure of the Ministry of Industry and New Technologies of Kazakhstan.