By Natalya Valuiskaya in National Overview on 12 June 2013 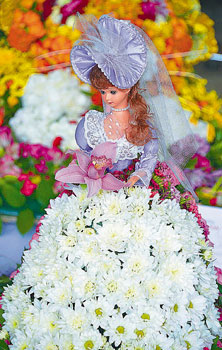 ALMATY – The park of the First President of Kazakhstan saw the flower festival “Almaty – Gul Qala” (Almaty – the city of flowers) organized by the Almaty city administration. This is the third annual festival of flowers in Almaty aimed at protection of greenery, and it is much awaited by the citizens and guests of the city.

“Such festivals create a special tint; they are a kind of propaganda of care for greenery,” Altai Rahimbetov, head of the department for natural resources of the Almaty administration, said. “Professional skills of the festival participants are improving every year, and the festival will definitely become the brand of our city.”

The festival is the concluding event in a range of activities taking place in spring on gardening and planting of the Almaty greenery fund. This spring more than 15,000 tree seedlings and bushes were planted and more than 100,000 were planted instead of the demolished and old trees. This year 190,000 square meters of flower beds are planned to be planted.

The festival of flowers, music and art started at the fair, where professional florists and amateurs showed various plants – asters, pansies, impatiens, chrysanthemum and roses, nurtured in LLP “Greenhouse.”

“I have been working here for 30 years, and 24 hours a day I dedicate to flowers,” director of Greenhouse Tatiana Kaminskaya says. “I am glad many flowers are planted in the city and vertical gardening is developing. Almaty is changing, approaching the European standards, and people themselves tend to create beauty around them.”

Florist amateur Natalia Shevkun displayed her seedlings, hanging baskets and landscaping design. “It is great that the simplest flowers are coming back. What seemed out of fashion and useless is quite opportune,” she commented. 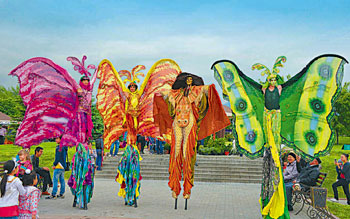 The flower festival is aimed at the protection of greenery.

Various art installations in a central fountain, modular gardens with the “living statues” and even huge butterflies “fluttering” among the guests were showcased. A huge carpet of about 450 square metres of cut flowers was really fantastic.

The highlight of the festival was a floral competition, which has already acquired an international status. This year, the best florists from Russia and Ukraine took part in it. The jury consisted of international florists: Irina Belobrova (Ukraine), Nikolai Akop (Moldova) and the first winner of Kazakhstan competition of florists Marina Shipovskaya from Almaty.

In the evening, when the mountains threw a cool lilac veil, fountain gushed on the main platform. The audience enthusiastically applauded. Meanwhile, a line of cars went through the city: a parade of cars decorated with flower arrangements. Among them “floated” a trailer in the form of a floral ship, and an apple – the symbol of the city. A little truck with a dancing gymnast was the last one in the festive procession.