November 22, 2012, has become a reference point for our country and the International Exhibitions Bureau (BIE). On this day, an overwhelming majority of BIE member countries voted for Astana as the venue for EXPO 2017. 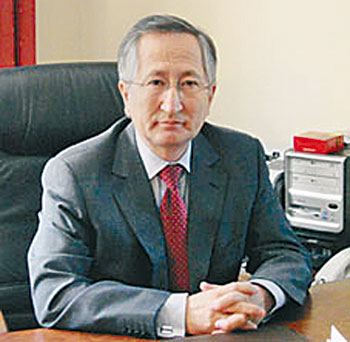 The BIE members made their choice in favour of the capital of Kazakhstan and a new geographic area for the international exhibition movement. Previously, expos had been held mainly in developed countries or in countries with large economies.

President Nursultan Nazarbayev, on learning the results of the vote while on a working trip to Paris, said, “First of all, it is the recognition of our capital as an appropriate centre able to host such a world-renowned event. Second, the choice of Astana speaks to the appreciation of our success and highlights the prospects for the development of our country, as well as the entire Eurasian region. Third, this victory helps bring into the focus the topic we proposed, ‘Future Energy’. And finally, it is the result of efforts of all the people of Kazakhstan.”

Indeed, this is a major victory for our country and our people, the result of the successful and consistent policy of our leader and his international prestige. The countries’ support and faith is a clear indication of the increased weight of Kazakhstan in the international arena.

The origins of expos

The idea to organise a venue for the display of discoveries, inventions, equipment and machines manufactured in different countries and for demonstrating worldwide industrial progress originated in France nearly two centuries ago, in 1833. It came to fruition 18 years later in the U.K. The initiative to organise the first World’s Fair came from Prince Albert, husband of Queen Victoria, who herself topped the list of founders.

The World Exhibition in London, in the midst of the Industrial Revolution, brought together representatives of more than 36 countries who submitted a wide range of industrial products, scientific research and art work. It was visited by about six million people (a third of Britain’s population at the time), and brought considerable income to the organisers. The main outcome, however, was that it became a showcase for the leadership of the British Empire.

The world exhibition then moved to France, which in response to the British challenge organised in 1855 the second World Exhibition in Paris under the patronage of Prince Napoleon. Since then, France has led Europe in hosting exhibitions, with five world and two special exhibitions held in 1855, 1867, 1878, 1889, 1900, 1937 and 1951.

Belgium is another active European host, with four world and three specialised exhibitions under its belt. Our recent competitor for EXPO 2017, the Belgian city of Liege, was the venue for some of them.

These events of the second half of the 20th century significantly broadened and deepened the topics related to progress and development, and from the beginning of the 21st century, emphasis has shifted to problems of environment.

It is noteworthy that for a relatively short term (from three to six months), expos have a serious impact on urbanisation and regional development.

Transitioning to a new way of development

The initiative to hold the international exhibition in Astana was voiced by President Nazarbayev during his visit to EXPO 2008 in Zaragoza, Spain.

An active, wide-ranging and exciting campaign to promote the Kazakhstan project was organised at all levels.

The tone was set by the president: the agendas of his talks with various heads of state always included the issue of support for Astana’s candidacy. His personal message was sent to a number of leaders. The government, including the Ministry of Foreign Affairs and other departments, was engaged in the promotion of our candidacy.

As a result of this overall teamwork, Astana was chosen to host the International Trade Fair with a record of 103 votes.

At the same time, it should be noted that the topic proposed by Kazakhstan played an important role in the fight for votes. Our country, despite the presence of rich energy resources, shares green interests and aspirations with other countries. The risks of the depletion of conventional sources of energy are great and the effects of their use is harmful to the environment and future generations, an understanding reflected in the Kazakhstan 2050 strategy. EXPO 2017 in Astana will be an opportunity to give a new impetus to the development of the country, the region and the planet.

President Nazarbayev has identified the necessary mechanisms and tools and appointed responsible persons for the implementation of goals and objectives set for the government and the capital.

Prior to 2017, we must build up Astana as a city and create all the infrastructure and amenities required by expo participants and visitors. And we must do it at a high level in order to make our capital more attractive.

But the work done can not be assessed only by constructed facilities, pavilions and their subsequent use. No less important and no less difficult a task is to change our attitudes and support the transition to a new track of sustainable development. In fact, all new projects should be implemented with new approaches related to energy efficiency, fully complying with the requirements of environmental protection. The country must make a breakthrough in the introduction of innovations in energy use and conservation. This marks a profound change in policies of development, power generation and energy use in various sectors of the economy (industry, transport, construction, agriculture, housing and public utilities and more). There are already concrete ideas and proposals in this area. I really hope preparations for EXPO 2017 will become an engine to speed up the process of sustainable development, in accordance with the Kazakhstan 2050 strategy.

The world is changing rapidly and irreversibly. Globalisation leaves fewer chances for protectionism and non-market mechanisms for constraining competition. One of the most important conditions for maintaining development is green growth and the readiness of the economy and society for that. We are facing radical structural changes in world production and consumption, distribution of labour and, consequently, values. Not only the West but many countries with transition economies are rapidly gaining a competitive advantage in this area.

The policy of promoting the green economy in Kazakhstan, the development of the ”energy of future,” is primarily motivated by concern for our citizens and the need to prepare our society for upcoming challenges, particularly in the provision of employment for our future generations.

In addition, a lack of progress in green initiatives will be considered by the international community to be a sign of backwardness. It would be risky not to follow the overall global trend or not to take advantage of advanced technology.

The initially costly green economy in the end will save significant financial and mineral resources of our country for future generations. Thus, according to Organisation for Economic Cooperation and Development (OECD) experts, the cost of fuel for organisation member countries at the expense of investment in low-carbon energy system will be more than 112 trillion dollars over 2020-2050.

The club of leaders in the green economy is still small. Among them is France, which was one of the first to introduce and promote renewable energy sources. As a result, France’s energy intensity is now 140 grams of oil equivalent per one dollar of GDP (on par with Japan and Germany). In the U.S. this figure is 190 grams; in China, 200 grams; Australia, 190 grams. By comparison, Kazakhstan expends 430 grams of oil equivalent.

France has played a key role in the promotion of EU green policies. The EU intends to reduce primary energy consumption to 20 percent and increase the share of renewable energy up to 20 percent of total energy production by 2020.

Of renewable energy sources used in France, hydropower accounts for 91 percent of the total; wind energy, 3.5 percent; solar, 2.5 percent and the use of wood fuel 2.3 percent.

It is very important that the French government is ready to transfer their technologies and expertise to Kazakhstan. Our French partners, who supported the candidacy of Astana to host EXPO 2017, are actively working on a number of profitable projects in Kazakhstan. Amid these are projects on the production of photo-electric elements from metal silicon, on the assembly of concentric solar cells, on the increase of energy efficiency at thermal power plants, the adaptation of hydropower stations to solar energy and the harmonisation of these sources in a total grid. In addition, there are proposals to build a thermodynamic power plant based on Fresnel mirrors.

Kazakh and French specialists have also conducted joint research on the extraction of high-quality methane from coal deposits in Kazakhstan.

France is interested in displaying its developments and new competitive advantages, not only in the energy sector but across the spectrum of the technological green economy: purification, desalination and water management; new approaches to ecosystem management and the creation of “smart cities;” the introduction of emission-reduction systems for the country’s transport infrastructure and more.

I am confident that the efforts of our country in preparation for EXPO 2017 and close collaboration at this important stage with countries like France will give a new impetus to Kazakhstan’s advancement into the top 30 developed countries of the world, one of the goals of the Kazakhstan 2050 strategy.

The author is Ambassador of the Republic of Kazakhstan to France.