ASTANA – The second Dutch week, an event intended to present the Dutch culture to the Kazakhstan public and raise awareness about cooperation between the two countries, kicked off June 10 in Astana.

The event is supported by the Embassy of the Kingdom of the Netherlands and includes a wide range of cultural, social and sporting events.

One of the main attractions of Dutch Week is an exhibition of reproductions of the work of Vincent van Gogh who is considered one of the greatest and most influential artists in the history. His paintings are among the most expensive ever sold on auction. The exhibition will contain copies of 44 masterpieces of the famous Dutch impressionist displayed in a gallery hall of the Nazarbayev Center through June 30. The exhibition offers a rare opportunity to glimpse Sunflowers and other famous van Gogh paintings in real size.

Two virtuoso musicians, Dutch pianist Thomas Verheul and Kazakh contrabass player Karim Yengsep, will also perform together for the first time as part of the cultural festival on the stage of the Shabyt Concert hall. The performance will be the second such Dutch-Kazakh music collaboration. Two months ago, the Embassy of Netherlands organized a similar event ,which included a joint performance by Mike del Ferro and Yedil Kussainov. The latest collaboration to be formed during Dutch week, “We Build Bridges,” hopes to offer a similar merging of East and West musical styles.

Dutch Week will also include the three-day Dutch Film Festival, which will expose Kazakhstan audiences to such Dutch films as “Uncle Henk,” “The Gang of Oss,” and “The Girl and Death.” The films will be screened at the Sary Arka Cinema. Dutch week, which concludes June 15, will also include a bike ride with the Astana Pro cycling team, Dutch musical performances, lectures, seminars and a mini football tournament. It will also include a Fryday W meeting with the Dutch Ambassador, Peter van Leeuwen on June 12.

The public is welcome at all events. 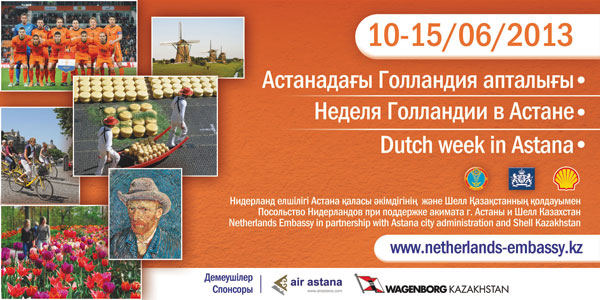