Day of the Capital to Celebrate Astana’s Growth

Amazing shows and cultural programmes await residents and guests of Astana during celebrations of the Day of the Capital prior to and on July 6.

ASTANA – On July 6, Astana will celebrate its 15th anniversary as Kazakhstan’s capital. The celebrations of the Day of the Capital are seen as a way to demonstrate the city’s growth from provincial city to 21st century regional hub.

Week-long celebrations are being devised to show Astana as both a comfortable, stable city for business as well as a spiritual and cultural centre for the region and the world. Astana city administration has implemented measures to improve the city ahead of the celebrations, which are focused on large-scale and affordable events intended to be within the reach of any citizen or visitor.

Planned concerts and performances are encouraged to promote Kazakh culture and ethnic features and emphasise the national spirit of the city.

On July 6 and 7, a “city within a city” will be open at the Kazakh Eli monument, with a fair, amusement rides, restaurants, art exhibitions and concerts.

Performance artists and classical, jazz, traditional and pop performances can be seen on its open air stage.

The soon to be opened “Astana Opera” will feature a 3D display of holographic images of the construction of the city and its iconic structures.

Other events, including children’s concerts, sports and cooking displays and competitions, art shows, parades and sales will be scattered across the city. Overall, there will be up to 100 events packed within a week long celebration in early July. The celebrations will end with pop music performances and a fireworks display on July 6. 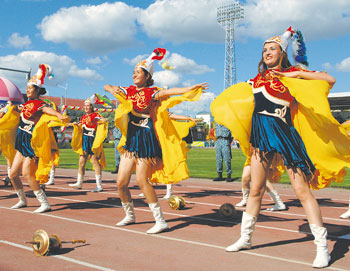 Celebrations of the Day of the Capital always include music performances, firework displays and a parade.

Astana will also welcome its first professional musical award, Astana Zhuldyzy, which will cover creative achievements of the last one and a half years, from January 2012 to May 2013. On July 5, the country’s musical elite will walk the red carpet at the Kazakhstan Central Concert Hall to take part in the new award ceremony.

“In recent years, the celebration of the city has become one of the most brilliant and anticipated festivals in our country. This year, we decided to organise the first professional music award, Astana Zhuldyzy. The award will celebrate and encourage the development of national musical culture, defining new, higher standards for the quality of our music industry,” head of the Culture Department of Astana city administration Bolat Mazhagulov said at a press conference about the new award.

He also noted the main difference between the Astana Zhuldyzy and other similar awards, emphasising the professional level of the experts who will determine the winners. A total of 100 experts have been selected from Kazakhstan’s music industry, including honoured artists, producers, composers, songwriters, and specialists in singing and fashion, as well as representatives of the media and the public.

“The experts have a lot of work to do: all the experts have to review and audition and identify three candidates for each nomination. After that, we collect the ballots, the counting commission analyses and we determine who is the best of the best,” Dinara Adam, main producer of the ADAM Media Group, said.

“Our capital this year marks its 15th year, so there will be 15 nominations of candidates selected from professional artists working now,” Adam said.