ASTANA – International Children’s Day, a celebration in honour of children and their protection, was marked on June 1 in Kazakhstan. 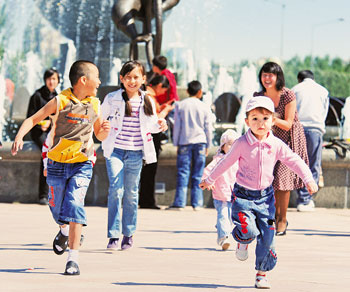 Falling on the first day of summer, this celebration has become one of the most exciting holidays for children in Kazakhstan.

The holiday was adopted by the Women’s International Democratic Federation (WIDF) at a special session held in November 1949. The United Nations supported the initiative and declared the protection of the rights to life and health of children as one of its top priorities. The first International Children’s Day was held in 1950.

In each country, 20-25 percent of the population are children. In different countries, the problems of children vary—in developed countries, problems include addiction to television and computers. Western Europe faces the early sexual development of children; Japan is in danger of seeing the destruction of traditional methods of education and the wider penetration of Western habits and behaviours. In the least developed countries in Africa and Asia, children are at risk of hunger, AIDS, illiteracy and military conflicts.

Today, more than five million children under 18 live in Kazakhstan. More than two million of them are of preschool age. Part of the daily work of the nation is to promote the interests of children and protect their rights, to prevent all forms of discrimination against them and ensure their rights to life and development. The laws “On the Rights of the Child,” “On State Youth Policy,” “On State Benefits to Families with Children,” “On the Prevention of Juvenile Delinquency, Child Neglect and Homelessness,” “On Children’s Villages of Family Type and Youth Houses” and “On Marriage and Family” are pursuant to that.

Each year, the share of the state budget for financing the social sphere grows. In order to ensure the rights of young citizens to education, more than 8,000 preschool organisations, more than 7,000 general secondary schools, more than 800 organisations of technical and professional education and more than 100 higher education institutions are operating in Kazakhstan.

More than 150,000 children have limited opportunities for development: special correctional schools, rehabilitation centres and offices of psychological and special education and inclusive education function for them. More than 21,000 of these children are integrated and trained with their contemporaries at general secondary schools.

On June 1, special celebrations – concerts, gifts and a variety of entertainments – were organised in Kazakhstan to please young citizens. This day is not just one of the most joyful holidays for children, but also a reminder to adults that children need their constant care and protection and that adults are responsible for them, responsible for protecting them from danger and ensuring the continuation of generations in them.

A large-scale campaign, “Kazakhstan, We are your children! We will live in the new world!,” took place on June 1. Events called “Writers of Kazakhstan for Children” and “Children of Kazakhstan Choose Sport” were also organised.

In Astana, talented children with disabilities from all over the country showcased their art at the Zhuldyzay festival.

On June 1, an event dedicated to the celebration of International Children’s Day took place at the Eco Village resort area near Astana. Police officers of Astana organised the holiday for children from low-income families and large families.

The programme of the event included musical performances and shows by circus artists. Children had an opportunity to drive police motorcycles and police horses during the day. The servicemen of the Arlan unit and representatives of the Police Canine Unit of Astana demonstrated their skills. Young guests participated in sport games and the event ended with a party and a grand closing ceremony with fireworks.

Also in Astana, fire station 16 of the Department of Emergency held a drawing competition on the pavement with the theme Kazakhstan is My Motherland.

In Almaty, the holiday began with the Boztorgay annual international competition of children’s creativity. From May 29 to June 3, performances were rated. The competition concluded with an awards ceremony and a gala concert in Gorky Central Park. Having made a wish, children let 1,000 balloons loose into the sky. Free drinks and ice cream were provided.

Almaty also held its fifth annual children’s cycling competition, this time drawing more than 200 participants between the ages of two to eight years old. In anticipation of vacation, children and their parents were reminded of the basic traffic regulations of the road by means of funny quizzes and performances by road police officers and the Young Traffic Inspectors group. There was also an open zoo day, free tours and gifts at the Kunayev museum and the presentation of the summer video theatre, City of Masters.

International Children’s Day in Shymkent was celebrated in the city’s biggest park, Dendropark. About 7,000 children of different ages gathered in the green recreation area. At the entrance to the park, young dancers welcomed guests, then followed an avenue of young watercolour artists, young painters, young football players, young chess players, young karate masters and other young fighters. South Kazakhstan is the leader of demographic indicators in Kazakhstan. More than 158,000 families of the region have many children. Each year, approximately 30,000 children are born in Shymkent. Today, 220,000 children are officially registered in the city.

In Pavlodar, the day was celebrated with a parade of twins and 116 pairs aged four to ten took part in the festive procession. Similarly dressed and styled twins confused even their parents. According to the department of education, there are 382 pairs of twins in the region, more than 100 of them in kindergarten In recent years, there has been a rise in births of twins. Only in the last year, 85 twins and three sets of triplets were born in the region.

From June 1 to June 3, children from orphanages from all regions gathered in Kostanay. This year, Kostanay became the venue of the eighth national Tan Sholpan art competition among pupils of educational institutions for orphans and children without parental support. The competition was first held in 2006 and has become an annual tradition. The opening of the competition coincides with International Children’s Day. This year, it was a competition of musical talent. Winners of regional selection rounds go on to participate in the national competition.

Also in Kostanay, the Autodrome in the Park of Culture opened on June 1, causing a boom in park visitors large and small.