By Julia Rutz in National Overview on 26 June 2013

ASTANA – On June 14, Nordic cooking master classes were organised by the Embassy of the Kingdom of Norway in the Metro supermarket and the Radisson Hotel as a response to the growing demand for freshly frozen fish in Kazakhstan. 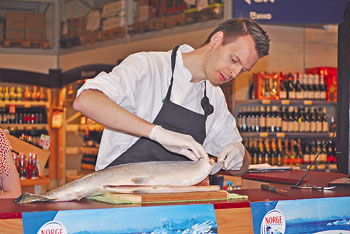 Norwegian chef Per Schierenbeck demonstrates easy fish recipes to locals at the Metro supermarket in Astana.

The Nordic cooking class in the Radisson Hotel was officially opened by Ambassador of Norway to Kazakhstan Ole Johan Bjørnøy.

In his speech, the ambassador emphasised Norway’s role as one of the world’s largest fish exporters. Fishing is one of Norway’s most important responses to the challenge of producing sufficient, healthy food for a rapidly growing population. Salmon, trout, mackerel and herring are some of the different sorts of fish that Norway exports to over 100 different countries.

The ambassador also stressed the important role Kazakhstan is playing in Norway’s fish exports. “Kazakhstan is a strategically important country and an increasingly important partner for Norway. An increasing amount of Norwegian fish is being eaten on Kazakh tables. But there is definitely room for more,” Ambassador Bjørnøy said.

The key concern of Norwegian exporters is the pure quality of the products, so Norwegian aquaculture does not use antibiotics. “It is also important to maintain a short distance between where the fish is caught and the processing plant,” the ambassador explained. A modern fleet of fishing vessels is also crucial to providing quality products, he said. The ambassador also shared his history as a member of Norway’s fisheries inspection service.

Following the speech, chef Per Schierenbeck of Norway led a class teaching techniques for preparing fish with ingredients easily found in Kazakhstan. Baked pollock with ginger, catfish with tarragon, pickled mackerel with rosemary and sweet and sour salmon were served to all guests. Earlier in the day, the Norwegian chef shared secrets of how to make tasty fish dishes in only a few minutes during a cooking show in Metro supermarket. Shoppers were given healthy halibut and salmon recipes, cooking tips and samples of the meal prepared by the master.

Originally from Son, a small town 50 kilometres south of the Norwegian capital, Oslo, Schierenbeck was lured into the culinary world at an early age. He started cooking when he was 17. After 14 years of work, chef Schierenbeck has developed his own unique style. The Astana Times talked to the chef about his impressions of the event and his previous Nordic cooking experience a year ago in Almaty.

What do you think about these events? How do you like them? 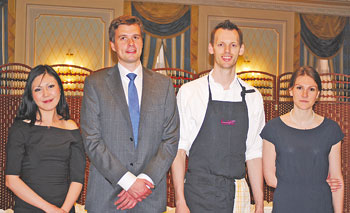 The organizers were quite happy with the enthusiastic response from the hungry crowd.

So far, they are a lot of fun. Usually I only see the hotel and the kitchen because I’m working, so unfortunately, I haven’t experienced Kazakhstan. Back in Norway we do a lot of events like this. We used to teach people how to cook fish every day. Even in kindergarten, little kids learn how to prepare healthy food. These are government projects and I think they’re fantastic!

Tell us about the recipes you presented today. Why did you choose them?

My idea was to show recipes with ingredients you can easily find here in local stores and teach people how to make something exceptional with them. That is my philosophy: simple produce, exceptional recipes.

What do you think about the popularity of fish in Kazakhstan?

If you compare the country to Norway, which is a big fish-eating country, you are starting to progress. So that’s why we’re here, to strengthen this tendency.

Have you tried some local dishes in Kazakhstan? 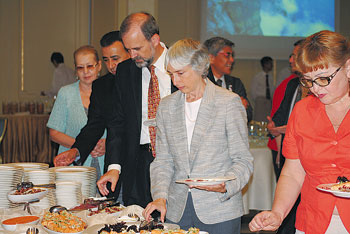 Distinguished guests such as U.S. Ambassador Kenneth Fairfax (c) and his spouse Nyetta Yarkin (to his left) had a chance to try fish cooking masterpieces prepared by the Norwegian chef at the Radisson Hotel.

Yes. Last time I was here, I tried four different kinds of horse meat. That was interesting. I think it is useful to try local specialities and discover something new.

Tell us about your plans. Are you going to come back next year?

I hope so. I think I may come back in November of this year to demonstrate one more fish cooking master class.

This is not the first time the Embassy of Norway has supported a cooking event. A year ago, the same master class was organised at the French Connection restaurant in Almaty. Local gourmands had a chance to watch the evolution of a dish and estimate the taste and experience of it. Before that, the best of Norwegian seafood had been presented at the International Food Exhibition Kazakhstan in Almaty in 2011. Potential Kazakh importers and the public stood in line to taste delicacies from Norway, including salmon, halibut and mackerel.

During the 20 years of diplomatic relations between Kazakhstan and Norway, the nations’ areas of cooperation have significantly expanded. Energy, agriculture and tourism are the key areas of bilateral cooperation. Both countries have major oil and gas resources, so cooperation in the petroleum sector is of particular interest. Now Norway, the world’s second largest exporter of seafood, is developing its fish exports to Kazakhstan. Despite the fact that the Kazakhstan market has traditionally had a strong demand for meat, the growing popularity of Japanese cuisine has the potential to change the demand for fish. Compared to previous years, the consumption of salmon, trout, halibut, mackerel, shrimp and other seafood has sharply increased. More and more Norwegian companies are coming to the Kazakhstan markets in order to supply the world’s biggest landlocked country with environmentally friendly marine products.