ASTANA – Chinese food is becoming increasingly popular with both Astana’s residents and visitors. So The Astana Times sat down with Vera Povetina, director of Chinese cuisine at one of Astana’s most popular Chinese restaurants, Zhirnaya Ovechka (The Fat Sheep), to discuss the philosophy and success behind her restaurant. 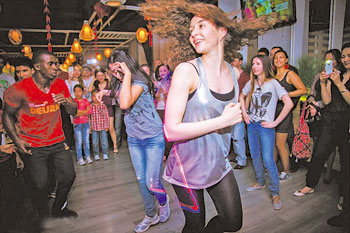 Amazing show programmes at this Chinese restaurant gather foodies to party from dusk till dawn.

How and when did you found your restaurant?

We opened the restaurant in August 2012. I will start with the fact that my husband and I have many connections to China. I had been living in Beijing for a year and my husband often travels to China on business. To persuade me to come back to Kazakhstan from Beijing, my husband promised to open a Chinese restaurant in Astana.

Is it difficult to establish a business here? What were the main difficulties you faced?

By the end of 2011, the idea of the restaurant was transformed into a goal. One of the main challenges was to find a premise in a good location in a desired area with parking and for a reasonable price. The search lasted for several months, but finally we found what we were looking for.

The answer to the question whether it is difficult to establish a business in Astana – it is not difficult to launch a project in any field of business. You only need the desire and money. But a more complicated task is to make the project working and profitable, especially in such an intense, competitive environment as the restaurant business.

Why did you choose such an interesting name for your restaurant, Zhirnaya Ovechka?

We did not hesitate with regard to the name. From the very beginning, we decided that, in addition to many traditional dishes in our restaurant, we would also offer a way of cooking that is unique in Astana – hugo.

Hugo – 火锅 [huǒguō] is literally translated from Chinese as “fire pot,” but here it is known as the Chinese or Mongolian samovar. The hugo principle is simple – it involves placing a pot of boiling broth on a burner in the middle of a table where guests are seated. Each guest then cooks what he or she would like from the items placed around the pot.

Usually, lamb is used as the base product and is cut thinly to cook in seconds in the boiling broth. In addition to lamb, other types of meat, seafood, mushrooms, vegetables and doufu are suitable. The cooked meat or vegetables are removed from the broth and before eating they are dipped in different sauces. 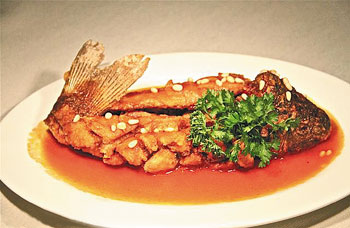 So, in many restaurants in China that serve hugo, the title contains the words “sheep” or “fat sheep.” Therefore, when the Chinese see our name, they know for sure that we have hugo.

Where do you find products and spices for the dishes?

Of course, it is difficult to find many products, especially sauces and spices in Astana. Therefore, we buy products in Almaty and in China.

Which are the most popular dishes in your restaurant?

In addition to hugo, Chinese dumplings, seafood – octopus, cuttlefish are very popular. With the beginning of summer, we have also started to cook Chinese shahlik.

Where does your chef come from?

The chef of the restaurant, Wu Yanquan, comes from the northeastern province of Liaoning. Before we invited him, he spent 10 years at the famous Moscow restaurant China Dream. A few months ago, guests from Japan visited our restaurant and asked to meet the chef. When Mr. Wu approached them, it turned out that they knew each other for many years and were regular guests of our chef in Moscow.

How often do you hold concert programs, such as the party with the Netherlands deejays, which took place on June 15?

We hold various concerts and parties once or twice a month. We provide a platform for projects with interesting ideas and assist in the organization. This year, we had a number of parties: Chinese New Year, “Weightlessness” in honor of the Day of Cosmonautics, the Brazilian party “do Brazil,” the performance of Colombian dance group Delirio, concert music of “Acoustic” studio and several parties with deejays from Almaty. Rustam Ospanov (creator of the international music festival Jazzystan) and Arsen Rysdauletov also appeared at some of our functions. On 15 June, we had a party with the assistance of the Embassy of the Netherlands called Night at the Netherlands. Headlining the party was the deejay duet KUDDEDIEREN. Our guests loved it. We also plan various theme nights dedicated to different countries and musical directions.

Of course, I love Kazakh cuisine. And even to meet the wishes of our guests when holding banquets, we offer beshbarmak. And at Nauryz, we offered Nauryz Kozhe as a gift to our guests.