Field archaeologists have completed preliminary work in Eastern Kazakhstan that will allow them to more thoroughly examine the burial site and materials of a third and fourth century BC “Saka Princess.” 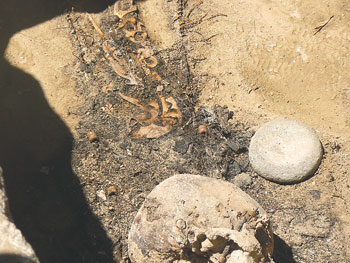 The Saka Princess was found in the Urdzhar district of East Kazakhstan.

The burial site of the high-ranking young woman was discovered during the reconstruction of Taskesken-Bakty Road in the Urdzhar area of East Kazakhstan. The expedition to examine the tomb and prepare it for further study included workers from the Alkei Margulan Archaeology Institute and professors and students from Semipalatinsk and Pavlodar educational institutions.

They discovered the woman’s stone tomb 1.7 metres beneath a burial mound. Parts of the burial site have been packed up for further examination. Those parts have been packed in such a way that no element, including the remains, clothing or jewellery of the noble woman, have been moved from their original positions. Their initial positions carry important information for researchers.

All items were numbered and recorded with drawings and photos to allow reconstruction of the burial site. This will allow a more thorough and careful examination of the discovery.

Near the burial site of the Saka Princess, archaeologists also found a headless human skeleton. According to archaeologists, another burial was found near the original site, wherethe headless human skeleton, which was also missing its right hand, was found. The researchers believe the second site might be a place where sacrificial ceremonies were held. In addition, the scientists said that the second body was buried more carelessly than the first and was just covered with stones. It is possible that was done to confuse potential gold-diggers.

The discovery is valuable, according to archaeologists, because the remains are well preserved and the tomb-chest has remained largely untouched. The discovery is known as the Saka Princess because the woman had a Saukele – or headdress – similar to that of the Issyk Golden Man discovered in 1969. The woman was about 170 centimetres tall.

Anthropologists will recreate the face of the woman and well-known fine art restorer Krym Altynbekov will reconstruct the young woman’s clothes. Other elements of the burial site will be studied under laboratory conditions, including tomography, X-rays and other methods. Later, portions of the discovery will be given to a new museum under construction in Astana.

The remains have been preserved in the underground climate for centuries, but now that they have been exposed, they are more subject to rapid decomposition, Altynbekov said.

But, he added, because the remains have been preserved, it might be possible to identify the woman’s hair or wig.

According to archaeologists, the most likely place of residence of the Saka Princess was the natural boundary Laybulak of the Urdzhar area where people still live. This is the area closest to the burial site and includes flowing mountain springs.

A stone container was also found on the bottom of the burial surrounded by carefully adjusted stone blocks and boulders. Ancient people often included food, clothes and various utensils in burial sites for the deceased to use in the next world. Clay and wooden utensils were found in the same tomb, in which mutton bones and female jewellery were found.

Food was an important part of nomad culture at the time and certain parts of sheep carcasses, such as the shoulder or leg, were distributed at ritual feasts. These feasts often took into account the social status, age and sex of the deceased. Many present-day Turkic traditions were established during those early periods.

“Opening a unique monument in East Kazakhstan under the direction of researcher Timur Smagulov is an important event in the scientific and humanitarian thought of not only Kazakhstan, but all of Eurasia. It is important that there are opportunities to document the development of cultures of the population of the Saka period. The culture of the population of this period is well studied as the result of discoveries from Central Asia to Eastern Europe. However, the uniqueness of this discovery is that, along with similar discoveries, such as the Ukok Princess in the Altai and others, this discovery appears to confirm the statement of Herodotus (Father of History) about the high status of women in the life of the Saka and Scythian societies,” Dr. Aiman Dosymbaeva, professor, archaeologist and chief research fellow at the Nazarbayev Center, said.