ASTANA – In late May, the Attraction youth theatre successfully presented a new production: the unforgettable romantic comedy “Sylvia” based on a Broadway playwright of Albert Gurney. 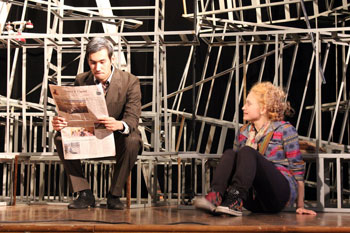 Ilyas Daniyarov (Greg) and Tatyana Lipina (Sylvia) mesmerize the audience with their moving and touching way of acting.

Well-known American playwright Albert Ramsdell Gurney, author of 25 plays and three novels, was born on November 1, 1930. He studied at the Yale School of Drama and graduated in Cambridge. He wrote scripts of different shows, musicals libretto. His first plays, staged 35 years ago on Broadway, brought him fame and worldwide recognition.

In the 1970s, he was named the most promising playwright of America, and confirmed it in subsequent decades.

Gurney is inclined to the literary game, to paradoxes. He pleases the audience by eccentricity of the characters of his heroes, witty plot twists, eccentric, exaggerated theatricality.

In the centre of the romantic comedy “Sylvia”, which was once included in the prestigious anthology “The Best American Play of the Year”, there is a tough love triangle, its two sides is a prosperous married couple. Greg and Kate are in their forties, their children have grown up and live separately. They lead a measured and monotonous life that is about work, weekend with friends, traveling. An anxiety has settled in the heart of Greg, there is no more harmony and confidence. He gravitates to nature, he wants freedom, vibrant sincere feelings. And today he has listened to the inner voice for the first time in many years, he has left a hateful job in broad daylight, quarrelled with the chief, wandered through the park and brought home Sylvia – a charming, naughty, sexy and leggy young creature. Kate has immediately felt it as a threat to family happiness. Trying to protect her home, she declares war on the unexpected rival.

The unusual situation is the fact that the flighty creature is a four-legged, ordinary dog. In the park a cute watchdog snuggled up to Greg, on its collar there was a tag with her name Sylvia meaning a forest nymph. He liked a charming, shameless, bold, arrogant dog at once. Her devotion to a new owner, whom it had chosen itself, was boundless. Sylvia infects Greg with its spontaneous freedom. Care of her, her dog interests, night walks help him re-experience the joy, the fullness of feeling, the taste of life.

Kate strongly opposes Sylvia, believing the time of the dogs in their life has passed. She returned to her teacher’s profession, obsessed with the idea of introducing Shakespeare in the schools programme, and she cannot understand her husband’s new affection, the changes taking place in his soul. Greg’s obsession for the dog caused Kate to seek help of a psychoanalyst.

Thus, Sylvia brought discord into the ordinary life of the married couple, the successful 22-year marriage. However, she only showed the family disaster that had brewed up.

“Sylvia” is a comedy about love and dislike, funny and a little sad, touching lyrical story about how to protect the soul from the pragmatism of the civilized world, how to keep the communication between loved ones.

The leading roles are played by Tatyana Lipina as Sylvia and Ilyas Danyarov as Greg, who are well-known and well-loved by the regulars of the theatre. Yana Semeshkina made a successful debut playing Kate. Almas Esmyrza played a doggie person, Julia Zimodra (Yekaterina Alekseyenko) played a girlfriend of Kate Phillies, Diaz Ahmetbekov played psychoanalyst Leslie. Flawless acting of young amateur actors, of course, brought the Attraction theatre to a new level, more mature, making people think about being.

It is a pity that not all, who wished, could see “Sylvia”. The work of Attraction does not have anything by way of a permanent repertoire and a new play has been shown only three times.

However, the Attraction will present the musical “Mamma Mia!” based on the songs of the legendary group ABBA presented soon for the residents and visitors of the capital. On May 31, everyone, who wishes, will have one chance to see, to hear, and to exclaim “Mamma Mia!”