Young Farmer Learns His Trade by Hard Work, Builds His Future on Land

WESTERN KAZAKHSTAN – The completion of the sowing season for young farmer Alexander Krasnikov does not mean the time has come for a holiday or a break. He is convinced that any day of the field season feeds a year. 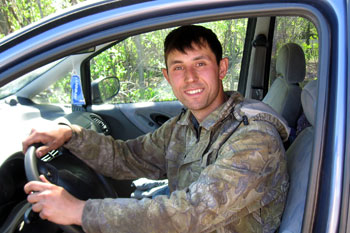 Alexander Krasnikov has learned some important life lessions working with his hands on the ground.

“When I was given this land to rent, first I had to uproot vegetation. Not all of it. But I divided it wisely, so that the tree belt remained,” Krasnikov said.

Despite his youth, he has already proven that it is ‘wise’ work that makes agricultural business profitable. He decided to do crop farming because since childhood he has believed that outside leisure is the best. And he decided that land is the most suitable place for a job. He inherited farm-like attitude to it from his grandfather, Alexander Fokin who always took Alexander junior for fishing, and into the fields.

“He was a brigadier of the advanced tractor brigade. But he worked on an old tractor,” the grandson recalled. “He taught me that the longer the equipment is in operation, the better it gets. The only thing is that it should be treated as a living being and you need to understand and feel it.”

The Michurino village near the Ural River where Krasnikov lives and works is indeed special. Its outskirts practically reach the city of Uralsk. In fact this is the Uralsk area, but with a rural way of life.

In Soviet times, there was a central farm with a telling name, “Fruit and Vegetable.” Local plantations and gardens were famous for their harvest. The village even had its own wine shop. Huge areas were occupied by greenhouses. Perhaps that is why the consequences of the crisis times in the 1990s were particularly noticeable here.

“It’s a shame that having fertile land, we still buy imported fruits and vegetables,” Alexander says. “Now the task is very right – not just produce enough products, but also increase the export potential of the agricultural sector. We should clearly see the perspective and work for growth at the national scale, and of each separate sector.”

His path to the profession was difficult. Almost every boy has a childhood dream. A lot of boys in Uralsk dream of the sea. The city has a factory that in the Soviet times produced torpedoes and other naval weapons, and now it is constructing ships and boats for duty in the Caspian Sea.

After the ninth grade, Krasnikov entered the College of Shipbuilding. But his mother missed her son and persuaded him to come back. So, he became a student of the financial and economic college. But still he had a feeling that he is able to do more. So he managed at the time to attend courses for an operator and programmer. By that time, he made a choice of his future vocation, to do farming. In his last year of college, he entered the mechanical faculty of the West Kazakhstan Agricultural University. It was difficult to study simultaneously in two educational institutions, but it was not new. He had developed ability to manage time.

He bought his first tractor for the money he got as the wedding gifts. But it was only enough for an old T-40. “I had to remember the grandfather’s recipe, lying in the simple rule – one needs to use his hands to handle the equipment. His knowledge of mechanics was useful,” Krasnikov said.

“I chose potatoes because it is called ‘second bread’ – the win-win crop. Any sort called by sellers ‘local’ on the market is of great demand. That is quite understandable. Potatoes imported from the far lying southern areas do not match the taste of the Ural potatoes,” Krasnikov said.

After a few years of trials and errors, he managed to increase his yields. Last year, some fields gave almost 140 quintals per hectare, which is a good result for the Ural region. There were also areas where yields reached 160 quintals. But this is not the limit.

“The folk wisdom ‘you reap as you sow’ is true. I went to the farm “Solana agro” in Samara region to get seeds for the current sowing season. I have sown early potato of ‘Leonie’ sort, which matures in less than two months, and ‘Arosa’ sort, which ripens longer, but is wonderfully kept until the next spring. I germinated and warmed seeds. As they say, I literally ‘nursed’ each tuber,” Krasnikov explained.

He believes that it is possible to bring the harvest to up to 350 quintals. But the main goal for him is the prestige of the firm, providing impeccable quality.

He invests all income he receives in purchasing new equipment. He cannot afford new, modern and expensive equipment. But there are no hopeless situations.

For several years, the weather has not been quite good for the local farmers. Many of them had to write off their grain fields. In order to pay off loans they had to sell agricultural equipment at bargain prices. This way, he bought a truck, another tractor, irrigation sprinkler, seeders, cultivators, harrows, mowers. He bought a pumping station; put a pipeline to the river.

A loan he obtained under the Employment 2020 programme was quite useful. This year, it was the first time he sowed the seeds. But so far, it is only barley, which is the most unpretentious in local conditions. Adhering to the rule, he bought seeds only of the first reproduction. He hoped that keeping to agricultural techniques he will not lose the harvest.

“In our risky area of agriculture ‘all eggs should not be put in one basket,’” he said. “In grain production, after two or three lean years, you give it up for lost, the economy is bankrupt. Once sowing is over, I transfer all equipment to the grasslands. Fodder is the top selling-item in the suburbs with the cost of one carriage reaching 30,000 tenge. Another dream is to revive horticulture.”

Krasnikov became friends with an experienced gardener, candidate of agricultural sciences Yuri Grebenyuk. He is already retired, but the soul of a veteran hurts seeing that the famous Ural apples have disappeared from the shelves. They were so famous that in tsarist times the carts with these apples were sent to St. Petersburg. Krasnikov is going to start plowing five hectares in the autumn, then to prepare the ground for a year and only after that to lay a young orchard.

He has several seasonal workers. After the first five years of work, he has founded a school of discipleship. Now he can cope with any equipment malfunction or breakdown, it is impossible to entrap him on a flow rate of fuel. He believes it is time to establish a youth brigade. And it’s not easy.

As a rule, youth wants everything and at once. The city is nearby, and it is not easy to get quick money in the village. But, the future in the agricultural sector is still for the youth. In Kazakhstan, unprecedented state support has been offered to agriculture in recent years. This is what Krasnikov told the district youth forum. He has many friends in Russia, which is not far from Uralsk. They invite him to move over and promise to help at first. But he knows for sure that there is no greater joy than to have the right to say “where I was born, there I was useful.”

He also considers his mother Vera Krasnikova his top assistant and adviser. According to her, Alexander was right to choose his profession. Since childhood he had a special ‘instinct’. Teenagers have various hobbies and tastes. Some get dogs, some drive motorcycles. In the fifth grade, Alexander first studied special brochures and books and then asked his mother to buy… a goat. At the time, he did not have good health. Either the age of transition, or the healing goat’s milk helped, but ailments and illnesses retreated.

“Not only means should be invested in the land, but the soul as well,” Krasnikov says. “You should think not only of yourself. I intend to run in the next elections for our regional maslikhat to represent the interests of youth there. Youth has enough problems. For example, affordable housing is built mostly in the city. But the village needs no less than the city does, and perhaps even more. If a young person has the opportunity to settle down to have a family and ‘grow roots’ in his native village, he will not leave it.”

“And I will certainly get another higher education degree in agronomy. After all, there is no such thing as too much knowledge,” he says.