The opening of the Days of Culture of Kazakhstan in Vienna, Austria, one of the first European countries to recognise Kazakhstan’s independence, took place on May 20th. The two countries mark the 21st anniversary of establishing diplomatic relations this year. 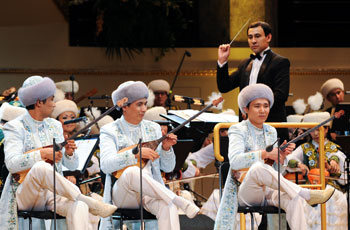 The programme of the Days of Culture included a gala concert of best artists of Kazakhstan.

Presidents Nursultan Nazarbayev of Kazakhstan and Heinz Fischer of Austria agreed that their countries would take turns hosting cultural days during the official visit of the Kazakh president to Austria last autumn.

On the eve of the concert, members of the official delegation and representatives of the Kazakh media attended a festival of hunting with birds of prey at the historic Rosenburg Renaissance Castle. Event organisers highlighted falconry’s origins in Eurasia and Kazakhstan.

“The homeland of falconry is Central Asia, which includes Kazakhstan. Kazakhstan is the only country in the world whose national flag depicts a golden eagle – a symbol of our country, of our nation and a symbol of our freedom. For Kazakhs, hunting with birds is not just hunting, but a kind of national art. Therefore, it has been preserved up to now,” said Minister of Culture and Information Mukhtar Kul-Muhammed

The event was opened by Minister Kul-Muhammed, who in his welcoming address noted that today Kazakhstan is known in many countries, including Austria, as a vibrant country with great economic, intellectual and creative potential.

Kul-Muhammed noted that during its years of independence, Kazakhstan has progressed along a path of prosperity under the guidance of President Nursultan Nazarbayev. According to many European politicians, Kazakhstan is a regional anchor of stability, a leader in political and economic development and an example of peaceful and harmonious co-existence of members of numerous nationalities and religions. Kazakhstan was the first former Soviet state to chair the Vienna-based OSCE [the Organisation for Security and Cooperation in Europe] and is the EU’s leading partner in Central Asia. Kazakhstan is Austria’s third-largest trading partner among the CIS States, after Russia and Ukraine. The progressive and steady development of its society is Kazakhstan’s main policy priority, as detailed in the Kazakhstan 2050 strategy. 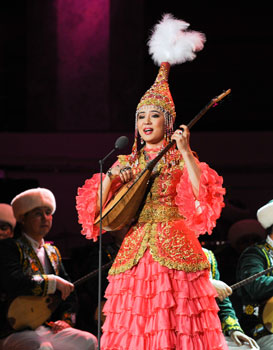 The minister also noted the importance of holding such events in the context of the multicultural and international dialogue between the West and the East.

As part of the culture days, a concert by musical masters of Kazakhstan was held in one of the best concert halls in the world, Konzerthaus, the Great Hall of Vienna. The concert was attended by Austrian politicians, the diplomatic corps, representatives of cultural, academic and business circles as well as the media and the international community.

The hall, with a capacity of up to 2,000 people, was completely filled, and the audience expressed its gratitude through massive applause for the performances of traditional Kazakh as well as European pieces performed on traditional instruments.

The Austrian public also had an opportunity to visit exhibits dedicated to the countries of Central Asia, including Kazakhstan, and to learn about the political, economic and cultural life of the country in a relaxed and festive atmosphere.

Cultural events in Austria were organised with the support of the Ministry of Culture and Information of Kazakhstan, the Embassy of Kazakhstan in Austria, the Federal Ministry for European and International Affairs of Austria and the Austrian-Kazakh Society.