ASTANA – On May 22-24, the capital of Kazakhstan will host the Sixth Astana Economic Forum (AEF) and the first World Anti-Crisis Conference (WAC), which will take place with United Nations support. 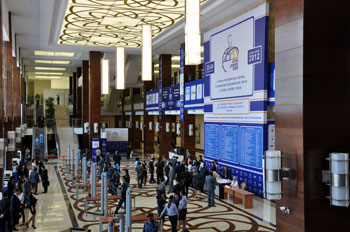 The main result of the forum, usually bringing together up to 7,000 – 8,000 scholars, experts and politicians, is an annual open letter from the participants, containing recommendations for developing the world economy. The letter is usually submitted for the consideration of G20 heads of state and heads of international and regional organisations for further discussion at the G20 summit.

According to Serik Nugerbekov, a member Kazakhstan’s Senate and co-chair of the 6th AEF organizing committee, this year the forum will bring together 7,000 participants, including 2,000 from outside of Kazakhstan. Top guests will include 10 Nobel prize laureates, three deputies of the secretary general of the United Nations, heads of ECOSOC, ESCATO, UNCTAD and other organizations, as well as numerous former heads of state and government and scores of business leaders, Nugerbekov told a special briefing for Kazakhstan’s media on May 3.

The main directions of the sixth AEF include prospects for global economic growth and processes for raw materials in 2013. Within these directions, possible solutions and measures for successful opposition to excessive price fluctuation will be discussed. Other issues are to include infrastructure and innovative technologies. Discussions of the role of infrastructure investments in stimulating economic growth, innovations, the role of state investments in infrastructure and specific examples of successful infrastructural projects in Kazakhstan will take place. Competitiveness at international markets is also one of the issues marked for discussion. This will encompass explorations of competitiveness problems, the theory and practice of competitiveness and the elaboration of practical methods of achieving sustainable economic growth. 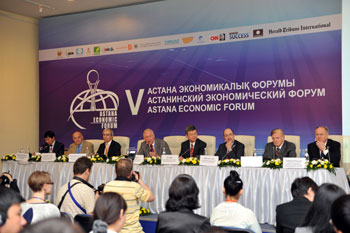 Social aspects of economic growth, financial systems, global risks and measures for their prevention will also be topics for discussion at the AEF. Issues at those discussions will include achieving balance between economic growth and social development, strengthening international monetary and financial systems and elaborating proposals and measures for the successful introduction of stabilisation and structural reforms.

In the “Discussions of Global Leaders” section of the forum, debates and meetings with prominent politicians and Nobel Prize laureates will be held on topical issues of the development of the modern world economy.

The World Anti-Crisis Conference, which will be held for the first time on May 23-24 at the initiative of President Nursultan Nazarbayev, is called upon to elaborate a World Anti-Crisis Plan for the U.N. based on democratic principles and encompassing the interests of all countries.

“On Dec. 21, 2012, the UN General Assembly unanimously supported holding World Anti-Crisis Conference in Astana, Kazakhstan. Now it is a major task for us,” Nugerbekov told the May 3 briefing. “The three-year-long effort now lies ahead of us to make the World Anti-Crisis Conference a success beginning in May 2013, and, hopefully, culminating in 2015 at the level of heads of state.”

The WAC this year will be dedicated to the problems of the world financial system, which has in recent years been experiencing major changes, the scale of which it is still difficult to determine. Indeed, the international community is still trying to rehabilitate financial channels for supporting the growth of domestic and external demand.

Discussions about developing economic and financial infrastructure will become the agenda of the WAC discussion. Other WAC themes are “A decade of regulation and unemployment in the Eurozone: political and economic changes,” “Assessment of monetary policy and its consequences for global financial stability,” “World capital markets in transition: change in the financial landscape?” Roundtables on the themes “New world financial architecture,” “Adaptation to new realities of the world economy” and “Recovery of growth in a more fragmented and deviated world economy” will be also held. 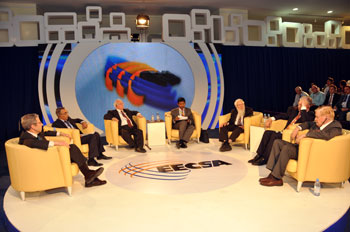 The dialogue of leaders will take place on May 24. This dialogue, during which leaders of countries, financial structures and international organisations as well as Nobel Prize laureates will summarise AEF and WAC activities, will close both events.

Preliminary discussions are regularly taking place on the G-Global communicative Internet platform, launched in January 2012 by the Eurasian Economic Club of Scientists in order to implement the initiatives of President Nazarbayev.

“The unprecedented nature of the G-Global platform is that it functions continuously in online mode, complementing and enhancing the contributions of global experts in the Astana conferences,” Nugerbekov, said. The project has been submitted for discussion and elaboration of mechanisms on world economic recovery and is called upon to radically expand the number of participants in search of crisis solutions. Currently, the Internet platform unites experts from 150 countries in a format of discussions and debates regarding world economic recovery. All participants of discussions on the G-Global portal participate in a contest with a prize fund of about five million tenge and which distributes gifts of recognition like laptops and tablet computers. The G-Global portal 30,000-32,000 visits weekly, according to Nugerbekov, almost on par with World Economic Forum’s visits.

Organisers of the AEF and WAC are the Eurasian Economic Club of Scientists, 14 ministries of Kazakhstan, the National Bank of the Republic of Kazakhstan, Samruk Kazyna, the U.N., the World Economic Forum, the World Intellectual Property Organisation, the Reinventing Bretton Woods Committee, the Madrid club, the Russian Academy of Natural Sciences and others.

When asked about the budget, Nugerbekov said the Sixth AEF would cost Kazakhstan’s budget slightly more than US$2 million. Previous forums resulted in signed investment contracts for Kazakhstan worth US$8.5 billion, he added.