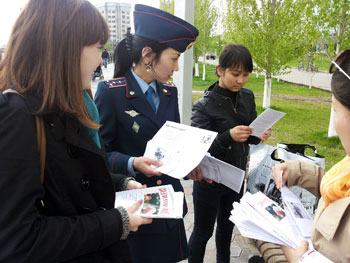 A police inspector distributes leaflets among women in Astana in order to stop domestic violence.

As part of the campaign, police officers from the Astana city department of internal affairs (police), nongovernmental organisations and governmental agencies conducted educational lectures, conferences and seminars with students from local universities, companies and enterprises of different types. Volunteers and inspectors distributed brochures, booklets and leaflets with detailed explanations of the law on the prevention of domestic violence.

“The right of any human being to live free and be protected from any acts of violence is developed and implemented in every civilized country and is the basis of the law on human rights. This right is equal both for men and women. So, violence against women in the modern world is an unacceptable social phenomenon, it brings suffering to women, causes physical and psychological damage,” Senior police officer, major Svetlana Imambayeva said to The Astana Times.

“The aggravating problems of family relationship, frequent acts of offence committed against women and children, when men abuse superiority over women and children during conflicts and disputable situation require new approach to this issue,” she continued.

“The main weapons in this fight against violence is to solve fundamental socio-economic problems, raise living standards and spiritual culture of people, providing social and legal protection. Every woman should know that her children and herself have rights, they should not tolerate violence and be able to get necessary support from the state. The aim of this campaign is to raise the legal literacy and to draw public attention to the problem,” she concluded.

Women are encouraged to turn to representatives of law enforcement with various family and life problems. Some recent examples are encouraging police officers to continue along this path of offering counsel.

The Saryarka district police department had received a complaint from a woman named Aigul about her husband. He had been insulting her, lashing out and not coming home. Aigul and her two children had sometimes had to seek shelter with friends and relatives. Initially, it had been decided to bring Aigul’s case against her husband to court, but the couple instead chose to try to cooperate to resolve their dispute. Aigul was given an order of protection against her husband, who was registered in the police database. According to Aigul, her family has now been restored and she is very grateful to the police officers who assisted them. On the advice of the police inspector, Aigul and her husband are taking psychological rehabilitation courses through the Korgau public fund.

Domestic violence is a profound violation, coming as it does from someone who is supposed to be a supporter and protector; someone with whom victims are linked by ties of marriage, common housing, property and livelihood and someone upon whom victims may be financially and morally dependent.

Domestic violence, in addition to injuring an individual, also destroys families, often leading to divorce, the loss of parental rights, and increases in juvenile crime, suicide and murder. Victims are often women, children and the elderly. According to sociological research, jealousy, alcoholism and property disputes are often triggers of domestic violence.

Following the decisions and instructions of the head of state, internal affairs departments are tasked with eliminating violence and discrimination against women in Kazakhstan. Any act of violence against women is a crime and should be punishable under the law. Since the beginning of 2013, 245 domestic violence offenders have been subjected to administrative liability in Astana and 1,793 orders of protection have been issued.