KOSTANAY – An open-air museum of military history is scheduled to open in Kostanay on May 7, the Day of the Defender. 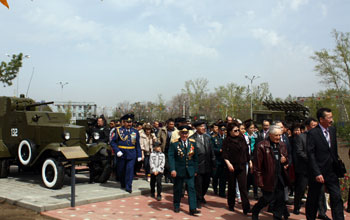 A new museum in Kostanay will preserve the glorious past for current and future generations.

The museum, which is unique in Kazakhstan, will exhibit samples of the most famous Soviet military equipment, including tanks of several modifications, armoured fighting vehicles and pieces of artillery on low pedestals, with sidewalks of paving stones designed not to obstruct visibility running between them.

Kostanay Victory Park will celebrate its 45th anniversary this year. The park features memorial plates and busts of soldiers killed in the Civil War and participants of the Great Patriotic War. Among the residents are dozens of heroes of the Soviet Union and full members of the Order of Glory. A memorial in the form of a large-scale sculpture of a victorious soldier, an eternal flame and a vast marble panel inscribed with names are dedicated to all those who died in the wars, protecting the motherland.

The project has been implemented as part of preparations for Victory Day and the Day of the Defender celebrations held by Kazakhstan’s Ministry of Defence in cooperation with the regional Department of Defence, regional administration, business structures and non-governmental organisations.