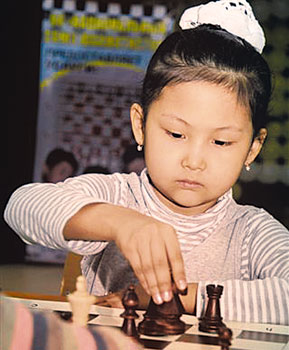 Assaubayeva was one of 52 participants from Kazakhstan, but the only one to win her category, gaining 8.5 points out of nine. Since 2011, she has won three world championships in Poland, Brazil and Romania.

Assaubayeva played her first game at the age of four. At the age of six, she won her first city championship. Now she is nine and plays chess six hours per day. She has been known to beat her opponents in 15 moves.

Assaubayeva has been training in Astana since 2010 with her personal coach Azamat Aubakirov.

“We have been working together since October 2010,” said Aubakirov. “Since the very beginning, the process was very active and the results appeared automatically. Bibisara plays for six hours per day, which is amazing for a child. For me it’s a pleasure to work with her.”

Chess is not the only passion of the young talent. She is also engaged in artistic gymnastics and was twice named her city’s champion. She also studies foreign languages, likes to read and gets good grades in school.

“I have three children and consider it necessary to invest in the children. It seems to me, that by learning and self-development children become more responsible and multi- talented and the family becomes stronger,” said Assaubayeva’s mother Liana Tazharikova.

Assaubayeva has already started preparing for the next World Cup in the United Arab Emirates and hopes to bring home a fifth championship.