ASTANA – Recently, another international couple decided to officially register their personal relations in the city hall of Astana. Gaukhar Orakbayeva, originally from Taraz and Joe Scott from a small town near Manchester in England met at work, realized they had been made for one another and decided to never break up. 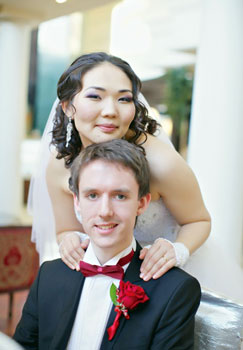 Happy newlyweds tell the story of love which has no borders.

“We are both working at the capital’s Haileybury school, I am a doctor, and Joe is a teacher of elementary grade,” Gaukhar Orakbayeva recounts the origins of their love story.

Today she is Mrs. Scott but in 2001 she arrived in Astana from Taraz seeking to enter a medical college. At that time, she could not even fathom her future husband will be from an English town near Manchester, who did not even know about Kazakhstan before coming here.

“I saw Joe for the first time back in September 2011, when he just came to our school, and we conducted a medical inspection,” she said. “Then I made an eye contact with him, and the first “spark” between us ran at that time. It is hard to say what in Joe has attracted my attention, probably, it was his calm character and a particular English charm…”

Their love story was like a good movie about a mutual love. Once at a gala evening organized by the school, they finally have a chance to talk. Later, their preferences in music led them to the school choir for adults.

Singing for Joe and Gaukhar has become a real hobby to which they dedicated themselves completely.

“And when did you realize that you cannot live without each other? And how did your parents react to your decision?” this reporter asked.

Joe’s parents respected the choice of their son and, when acquainted with his choice, treated her like their daughter.

Mrs Scott – Orakbayeva cannot forget those dizzying romantic moments in the recreation park in Astana, when Joe offered his hand and heart and as a sign of love presented the engagement ring. Then they decided their wedding should take place on the first day of spring.

Their wedding was a great example of an international fest, with songs, toasts and congratulations in Kazakh, Russian and, of course, English.

Joe’s parents arrived from Britain with his grandmother and grandfather, who are 84 and 86 years old, to share the happiness of their grandson.

“Joe and I would like to continue education to become more qualified,” Mrs Scott – Orakbayeva says. “It is not so common nowadays to meet a young man, a primary school teacher working with children of 5-6 years. Joe is one of those few.”

Both husband and wife clearly state that their family is the one based on mutual respect. They emphasize that whenever you understand, respect views of your partner, his or her preferences and tastes, there is peace and harmony in the family.

Joe Scott likes Kazakh traditional cuisine, especially beshbarmak, horse meat, plov, and manty. His wife does not let him forget about traditional Yorkshire pudding and English roast beef, though. Everything his wife cooks is delicious, he says.

“Gaukhar Orakbayeva and Joe Scott complement one another, they are a very nice, cute couple, and I want to wish them love and happiness,” the head of the registrar office at Astana’s Yessil department of justice Bakhytzhamal Bazarbayeva said.