ALMATY – On May 20, Almaty welcomed the participants of a city forum held within the National Forum “My Country’s Destiny is My Destiny.” 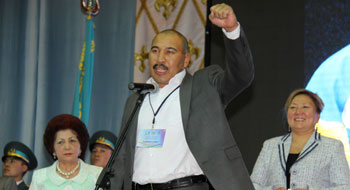 The honorable guest, Sydney Olympics boxing champion Yermakhan Ibraimov holds a speech at the forum in Almaty on May 20.

Participants and guests of the city forum were invited to attend a photo exhibition dedicated to the social and economic development of the city and the achievements of its residents.

Famous Almaty residents, who have contributed to the development of the state and the city were invited to take part in the opening ceremony. Among the speakers of the forum were honourable residents of the region, such as Kazakhstannnyn Enbek Eri (Kazakhstan’s Labour Hero in Kazakh), head of gymnasium No 159 Ayagul Mirazova, boxer and Sydney Olympics champion Yermakhan Ibraimov, President of “Erke – Nur” company, Farida Markhamitkyzy, member of Central Committee of Kazakhstan’s Patriot Party member and member of Coordinating Council of “Nevada – Semey” Iinternational Fund Guldana Nurpeisova, founder of “Men omirdi suyemin” (“I love life” in Kazakh) Meruert Suleimenova, the second year student of Almaty Technology University and Chairman of the “Zhastar” debate club Vladimir Seselkin.

“We are proud of our city, which is called the cradle of Kazakhstan’s independence. Today, we have every opportunity and positive conditions, such as social consent, accessibility of work and labour and a clear vision of success perspective to bring our plans into reality. The most significant fact for us is that the young generation will continue all this large-scale work and will greatly contribute to the strengthening of the state and the prosperity of our motherland,” said Almaty Deputy Mayor, Zauresh Amanzholova as she welcomed the participants of the forum.

Forum speakers also emphasized the importance of loving one’s country and the role of the love to the motherland in their addresses, bringing to the agenda the necessity to maintain and develop peace and consent in the country. Speakers called on the forum’s participants to be patriotic not only in words but by actions.

The forum ended with a concert by singers, such as “Tengri”, “Izumrud”, and “ST Bbrother.” shared their art. In line with tradition, the concert’s last song was Kazakhstan’s popular folk anthem was “Atameken” performed by its author, Yeskendir Khassangaliyev and his son Birzhan.

The first “My Country’s Destiny is My Destiny!” national forum was held in Astana on the eve of the Day of the Capital in July 2012. The initiator and organiser of the event was the Nazarbayev Center, a multifunctional scientific, analytical, humanitarian and educational state institution. The Astana national forum attracted wide publicity and it was decided that it would be held in all regions of the country annually.

The goal of the forum is to identify and showcase the success stories of people across the country who have made a worthy contribution to the establishment and ongoing development of their region and independent Kazakhstan in general.