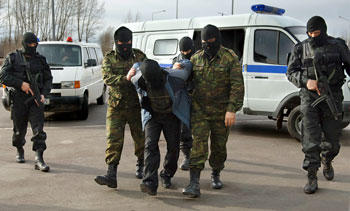 The accused include six suspects ranging in age from 22 to 52 years old. They include Ali Sharipov, Serik Koshalakov, Erzhan Kadirsizov, Agzam Kaskabayev, Syrymbet Zhunusov and Batyrlan Abdikerov. They are charged under seven articles of the Criminal Code, including terrorism, propaganda of terrorism or public calls for carrying out of an act of terrorism, founding, directing a terrorist group and participating in its activities, preparation of a crime and attempted crime, theft, theft or extortion of weapons, ammunition, explosives and explosive devices, illegal acquisition or carrying weapons, explosives and explosive devices.

“The accused Mr. Koshalakov arrived in Astana in 2009. Mr. Koshalakov with his friend Ali Sharipov began to stick to radical religious views, calling for a jihad,” Prosecutor Malika Shashdauletova said at the first court sitting in her accusatory speech on May 16.

According to Shashdauletova, these men opened a cafe near one of Astana’s mosques in September 2012, where they conducted agitating discussions with clients. After these meetings, they selected a few individuals they felt would be willing to fight for fanatical ideas. The plans of the accused terrorists Koshalakov and Sharipov, who wanted to see the creation of an Islamic Caliphate in Kazakhstan, included attacks against law enforcement personnel to seize weapons and robberies to help fund their organization. They planned to transfer the funds to the Caucasus. In addition, they are accused of planning attacks in public places.

Koshalakov is accused of planning an explosion in the Palace of Peace and Accord, which was to be followed by an attack on the capital department of the National Security Committee and a terrorist attack in the Theatre of Opera and Ballet. The plot allegedly included a plan for a wife of Sharipov to put on a suicide bomber belt and explode herself at the theatre’s opening.

The members of the group are accused of leasing the premises in which materials to make improvised explosive devices were believed to have been kept. Weapons and ammunition, brochures containing extremist information and plans for the Peace Palace and theatre attacks were also found.

Before launching the attacks, the accused terrorists are believed to have planned to rob jewellery boutiques in the Capital Bazar on New Year’s Eve.

The men are accused of studying the operation of the trading house and the location of surveillance cameras. They are believed to have purchased the necessary equipment for the robbery and had devised a means of escape. Authorities believe that on Dec. 31, Abdikerov and Sharipov went to the trading house to commit the robbery. On Jan. 1, however, Abdikerov was seized by officers of the Department of the National Security Committee.

The other members of the alleged criminal group were arrested later. During searches in the storage area believed to be rented by Sharipov and Koshalakov, investigators found ammonium nitrate, hydrogen peroxide, aluminium powder and sugar, which were sent for expert examination. The examination showed that these substances are used to make improvised explosive devices.

Five members of the group have admitted to partial participation in certain criminal acts, however, all of the accused have denied involvement in any terrorist activities. The group’s alleged leader Serik Koshalakov denies all charges.

By the decision of Meiram Zhanguttinov, a judge in Astana’s specialized inter-district court for criminal cases, the main trial regarding the alleged attack will from now on be held in Astana behind closed doors.