ASTANA – Since the middle of 2012, Western media abounded with news mentioning unexpectedly impetuous investment activity of Kenes Rakishev, a Kazakh businessman. Coverage of investments by this mining magnate, who has not been previously noticed as expressing love for venture capital business, sounded more like reports of Genghis Khan’s military campaigns in Europe: first, he becomes a shareholder and head of the board of directors of an American company, Net Element. Having received a nickname “The first Kazakh on Nasdaq”, he then invested $20 million in Mobli, an Israeli start-up, along with Hollywood movie stars Leonardo DiCaprio and Tobey Maguire and tennis superstar Serena Williams. 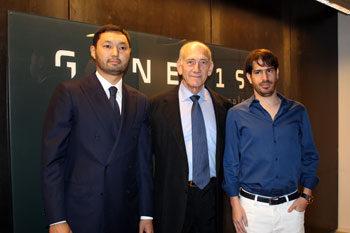 Co-founders of a new venture capital firm Genesis Angels (left to right), Kenes Rakishev, former Israeli Prime Minister Ehud Olmert, who serves as its chairman of the board of directors, and Israeli entrepreneur, CEO of Mobli, and Director of Infinity AR, Moshe Hogeg, at a meeting in Tel Aviv in late April.

Then Rakishev joined the Advisory Board of the Canadian Sprylogics International Company while financing the start-ups such as Rallee and TriPlay. At the end of 2012, according to BuzzSparks.org, he even entered the top 10 private investors in the world alongside Peter Thiel, Yuri Milner and Sergey Brin, the founder of Google.

What stands behind such a business activity? Is there any special strategy? It’s one thing when a famous celebrity or a venture capital superstar invests in a start-up, and in addition to money, shares a fan-base and expertise with it, and it is another thing when this is done by an enigmatic multimillionaire from a country with a difficult name to remember.

Kenes Rakishev, 33, explained his strategy in an exclusive interview with The Astana Times.

How did you start your investing in Western high-tech start-ups?
I was interested in venture business long ago, since I studied advanced management and business strategy at the University of Oxford Saïd Business School. But it was only two years ago that I decided to be actively involved. The global financial crisis has turned the abstract notion of diversification into a real need on the business agenda.

For many investors, it is much more convenient to use already existing specialised venture capital funds, with a large staff of various experts. But for me, it was more interesting to dive into it by myself to understand how this business works from the inside: beginning from the search for promising start-ups, through the investment seeding process to the point of exit from the project or placing the start-up on the stock market as an initial preferred offering (IPO). I position myself as an active venture capital entrepreneur who takes decisions independently. For the same reason, I became a shareholder of Net Element, a functioning American company which has its shares listed on NASDAQ (the world’s largest stock exchange for high-tech companies).

Successful start-ups and ideas know no boundaries. There is no difference for me where they come from, whether it is Canada, Kazakhstan or Israel.

What strategies have you followed in your IT start-up projects?
I will focus on two examples: Net Element International and Mobli.

Prior to my investing in Net Element, its priority areas of specialization had been identified already as e-commerce, mobile payments and providing content. However, the vision and strategy of the company needed to be reconsidered despite its promising prospects in selected areas. The company could not achieve a break-even level for some time.

We decided to expand the scope of business: not to restrict ourselves within the boundaries of the United States but also to enter the international markets, including the Commonwealth of Independent States and Russia. Within half a year of entering the Russian market, TOT Money, the Net Element subsidiary that runs mobile payments and mobile commerce, reached the leading position in that market. For two consecutive months, the Beeline mobile operator nominated TOT Money as the No. 1 provider in the Russian market.

I am very positive about the development of the company’s business operations in Russia, where the market for SMS payments and mobile commerce is currently estimated at $2 billion, and the number of users of SMS-banking has exceeded 43 million people. If we take into account that these figures are projected to double within the next three or four years, the potential for the growth of our company is enormous.
According to Juniper Research, by 2017 the volume of global mobile payments market will reach $1.3 trillion. We expect to possess a significant share of it, and I am very pleased that recently Net Element International has successfully completed the acquisition of the U.S. provider of electronic and mobile payments – Unified Payments. It was named the fastest-growing private company in the United States by the famous high-tech INC. Magazine in 2012. The founder of Unified Payments, Oleg Firer, has been appointed as the CEO of Net Element. I am sure he will be able to repeat his success and make Net Element a global leader.

As for Mobli, before I invested in this start-up, I examined it for a year. I liked the vision of Moshe Hogeg, the founder of Mobli. He wanted it to be broader than just another clone of Instagram.

Mobli is a social network for a new generation. It uses the full range of technological advances in the field of communications. The opportunities of Mobli are infinite, unlike Instagram, which only offers a narrow set of filters for photos, crammed into a standard square. Mobli speaks in 12 languages in which you can chat online, unlimited photo- and video-sharing, and the plenty of filters and messaging options among users. 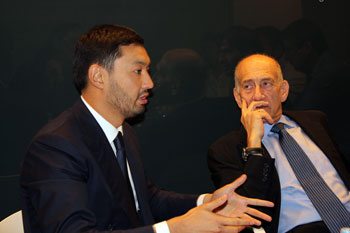 Kenes Rakishev and Ehud Olmert discuss business strategy for a new VC firm they have set up.

Despite the absence of advertising and the technical costs of organic growth, Mobli breaks records continually. Every day, the number of new users grows by 60,000 to 65,000 and, its traffic exceeds one million posts per day. In less than six months the total user base increased from five million to seven million.

The latest version of Mobli is the number one application in the app store in Brazil, Kazakhstan, Israel, Uruguay and Finland. We have leading positions in Spain and France. More and more celebrities are choosing Mobli. They include Lindsay Lohan, Grammy-winning Tyrese, hip-hop artist Lil Wayne, and Kazakhstan tennis star Yaroslava Shvedova, to name a few.

If you look at the audience of Mobli, it is mostly young people. I am delighted that Mobli has become the “native” application for a new generation of people who are far from stereotypes and prejudice. This tells me that Mobli has a great future. Since we turned down a takeover offer from Google, we have received two more lucrative offers to sell, but we believe that it is too early to talk about exit.

In your opinion, what are the prospects for the development of the high-tech sector in Kazakhstan?
Kazakhstan is taking its first steps towards the development of a high-tech and innovation market. For a state with so many raw materials to develop, it is not easy to find the extra motivation to invest in this field. To ensure the market takes off, it is necessary to come a long way. A new entrepreneurial and start-up culture has to be fostered. Appropriate infrastructure has to be created. The state must adopt special measures to encourage the development of knowledge-based industries. Public-private venture capital funds must be launched.

In fact, these steps have already been taken, with the personal participation of President Nursultan Nazarbayev. The president stressed the need to rapidly introduce e-commerce, e-banking and encourage high tech innovation at the most recent meeting of the Atameken Union National Economic Chamber. The government is also playing an important role in this field led by Deputy Prime Minister and Minister of Industry and New Technologies Asset Issekeshev.

I see my role in this process in two dimensions. First, in making a “Kazakh Case” in the international market, and I see that as the most crucial element of soft power that can be applied by the state. The governments of Japan, South Korea and Taiwan, for example, had managed to successfully utilize this component whilst promoting the positive country image through their flagship companies.

I cannot wait until the appropriate conditions for the development of innovation and high-tech would finally appear in Kazakhstan. I want to go global and create an innovative high-tech business, using all available scientific and human resources, and then import the high tech into my country.

Second, at the same time, I intend to ensure that these appropriate conditions appear as soon as possible in Kazakhstan: through a public-private partnership, through my participation in the Atameken Union National Economic Chamber, through my involvement in the Zhas Kenes Youth Council and through the support of talented young entrepreneurs and the nurturing of national cadres.

At the first meeting of the Zhas Kenes Youth Council recently we announced the establishment of a business school for young entrepreneurs at our own expense and we are translating modern business literature into the Kazakh language. We have many ideas and we hope to implement all of them with God’s help. I believe in my country and my people, and I think that we should not just wait for the future to come: we should build it with our own hands right now.