By Natalia Kurpyakova in Culture on 15 May 2013

ASTANA – A new exhibition of contemporary Israeli art, Honey and Pomegranate, dedicated to Israel’s 65th anniversary as an independent country began showing May 3 at the Kulanshi Art Center. 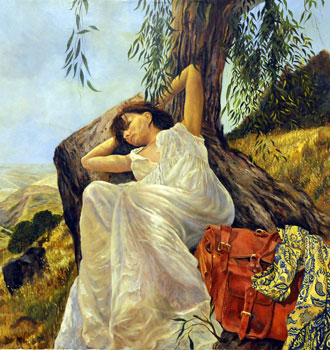 The exhibition includes dozens of works that appear as if they descended from the Renaissance and were created by husband-and-wife artists Olga Oreshnikova and Hanan Milner.

Oreshnikova is a third-generation artist and graduate of the St. Petersburg Ilya Repin Institute of Painting, Sculpture and Architecture. Oreshnikova’s grandfather, Viktor Oreshnikov, was once the rector of the institute and was a People’s Artist of the USSR. Her husband, Hanan Milner, who was born in Lithuania, studied art in Israel and participated in the workshops of the famous artist Ernst Fuchs.

The two artists share a command of technique, an eye for composition and a rich palette. They also often choose similar themes and present them in a little similar style. The two artists differ, however, in their depictions of women, notes the head of the Kulanshi Art Center, Leyla Mahat. Milner’s females are the objects of admiration while Oreshnikova depicts her women in motion with an emphasis on their relationships and feelings.

Oreshnikova recreates a distant, seemingly forgotten world, hidden somewhere in the subconscious. The artist’s task, says Oreshnikova, is to “pull out” from that forgotten world vivid images and to play with those images to simulate reality.

Milner’s works depicting females are more intimate, featuring graceful barefooted models with flowing shawls and trains. Such images can be seen in his works “Back in a Pistachio Dress,” “Sleeping Beauty in Red” and others. His works also depict luxurious, impeccably composed still-life paintings with expensive carpets, thoughtful draperies and gorgeous lace, the perfect beauty of which is offset by a piece of newspaper or casually placed pencil.

Oreshnikova’s and Milner’s works are exhibited in Israel, Russia, Europe and the United States, but this exhibition has provided their first opportunity to visit Kazakhstan.

“Astana is amazing. The city has vibrant landmarks and it is interesting to wander around it,” Oreshnikova said.

The name of the exhibition is the title of one of Oreshnikova’s paintings. The painting reflects the essence of the exhibition, which demonstrates the variety of styles of the East and sometimes conceals – as under the skin of a pomegranate – the commonness of traditions and cultural memory.