The regulation of the grain market will mean the transition of the industry to a new stage of development and the need to confront new internal and external challenges. The production of grain is today the most important segment of the agricultural sector, and competent state regulation of grain production at low crop diversification is essential. The measures taken by the Ministry of Agriculture are based on market principles. 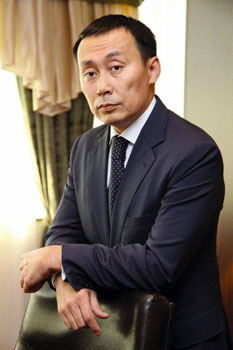 The grain industry has accumulated contradictions and complexities on issues of lending, subsidies, storage, transportation, sales and the formation of reserves. These are infrastructure problems that are costly in terms of time and finance and may even impact the food security of the country. In addition, the volatility of the grain market strongly influences the social status of villagers.

The institutional foundations of the grain industry were laid in 2001. The law “On grain” provided clear legal regulation of the grain market’s participants. At that time the law represented a significant change, one which stopped the chaos and anarchy at grain reception centres and elevators and formed a civilised market for grain.

For the first time in the post-Soviet space, Kazakhstan created the institute of grain receipts. This order of non-equity security confirmed the ownership of grain and could act as a collateral obligation. In addition, grain receipts obliged grain to be shipped at the first request of its owner. Grain was sold through endorsement. In general, between 2002-2012, second-tier banks granted loans on the basis of grain receipts totalling 838 billion tenge (5.6 billion dollars) on pledges totalling 45 million tons of grain.

Later, various forms of state production and sale of grain were introduced. Subsidies, grants and the Three Years of Village Programme stimulated the growth of grain production. However, not every year was profitable. There were years of crop failure and losses for farmers, and with the levelling of large declines in income in 2004 it was decided to introduce crop insurance. New financial institutions such as rural credit unions, mutual insurance companies and leasing lending began to appear in tandem with the new insurance.

Drastic changes in the protection of the domestic market were made after the ban on grain exports in 2008. The consequences of the ban were so negative that it was necessary to form a system to stabilise the market with the creation of stabilisation funds and the transfer of functions to level market spikes to the National Food Corporation.

Problems of scarcity, problems of excess
All together, an acceptable legal environment, measures of state support to the industry, and, of course, favourable climatic conditions helped increase the amount of grain harvested. From 2008 to 2012, grain production averaged 17.7 million tons, 2.2 million tons – 14 percent – higher than in the previous five-year period (2003-2007). Since 2007, Kazakhstan has been a world leader in flour exports and is among the world’s top ten exporters of wheat.

Meanwhile, the absence of direct access to the sea and the deeply landlocked locations of much of the country’s farmland are proving to be barriers to increasing production volumes much more. The grain terminal at the port of Aktau on the Caspian Sea can handle 700 tons of grain a year. About five million tons were sent to the markets of Central Asia. This is a quickly growing market, but it is still limited. There is a Chinese market of enormous potential, but as of now the volumes delivered to it are not very significant. The increase in wheat production, therefore, has become excess.

The record-breaking harvest of 2011 highlighted another problem which had been discussed frequently but never resolved: the lack of grain reception centres and facilities for drying and storing grain. The shortage of grain carriers and the complex relationship with the operators of the cargo fleet continue to be major limiting factors.

A series of measures neutralised the effect of these factors and helped sell the harvest. First was the allocation of funds from the national budget to subsidise transportation costs to the ports of the Azov-Black Sea basin, the Baltic Sea and China. This allowed more than five million tons of grain worth 25.1 billion tenge (167.0 million dollars) to be shipped for export in the 2011-2012 market year.

In addition, the JSC National Food Corporation helped unload elevators in the north, transferring about one million tons of grain from northern grain-enterprises to less-loaded grain centres in other regions. In order to prevent a collapse in prices, the Food Corporation purchased about 5.1 million tons of wheat at the price of production, withdrawing it from the market. Re-equipped open wagons and cars were used to transport the grain. In the end, a record level of grain exports was reached: 12.8 million tons, including flour in the accepted equivalent.

Meanwhile, even in lean years there are problems. Last year the crop was two times lower than the year before because of drought. The gross grain harvest was 12.9 million tons compared to 27 million tons in the previous year. However, the carry-over remained high, which allowed the internal market to determine the export potential of 7.8 million tons.

To provide the regions with food grains and to stabilise the price of flour and bread, the Ministry of Agriculture, regional administrations and municipalities of Astana and Almaty and JSC NMH KazAgro’s ALE Union of Grain Processors of Kazakhstan concluded memoranda for the supply of 1.3 million tons of wheat at the price of 28.000 tenge per ton.

In addition, memoranda were concluded with the associations of poultry and pig husbandry for the supply of 312 tons of coarse grain at a fixed price. The financial institutions of KazAgro prolonged commitments for loans at the total sum of 24.7 billion tenge for agricultural producers whose crops were affected by drought.

Taking into account the abolition of subsidised transport costs for grain exports (from August 1, 2012), it is clear that regulation of the grain market in Kazakhstan was achieved without imposing restrictions on the export of grain, as happened in neighbouring countries (Russia imposed a ban on export of grain, Ukraine set quotas).

Infrastructure increases
With the growth of wheat production, its carry-over balance increases annually, putting pressure on the domestic market and blocking the acceptance of new grain. But there are positive signs of a resolution of this problem. In the past year, several Arab countries have proposed the creation of a fund of mutual food assistance under the auspices of the Organisation of Islamic Cooperation. This would form a strategic grain reserve in the amount of up to two million tons of grain in Kazakhstan. But the implementation of this initiative requires increasing capacities for storage and transfer, which is reflected in the new programme for the development of the agro-industrial complex, Agribusiness in 2020.

Currently, there are grain terminals in the ports of Aktau, Baku and Amir Abad (Iran). In order to increase grain exports to the countries of Central Asia, Afghanistan and Iran, we put into operation an elevator complex with a mill at Beineu station in Mangistau region. Recently the construction of a new railway line, Uzen-Kyzyl Kiya-Gorgan, which connects Kazakhstan and Iran, as well as the Zhetygen–Khorgos line connecting Kazakhstan with China was completed. China is of special interest not only as a promising direction for grain export, but also as a transit country for the transportation of our products to Southeast Asia.

To promote grain exports, terminals on the border of China and Kazakhstan and Turkmenistan and Iran are planned, which would remove the problem of different railway gauges and the problem of packing grain in bags, which in turn will reduce the selling price of grain and increase its competitiveness in foreign markets.

The Agribusiness 2020 Programme provides for the construction of 3.5 million tons of grain storage tanks, as well as increasing handling capacity at the port of Aktau. In order to increase grain exports to Baku and Poti, Kazakhstan will need to use a ferry service and purchase five ferries for further transport to foreign markets of one million tons of grain. The construction of elevators on export routes will be carried out with the participation of subsidiaries of KazAgro. Over the past three years, grain storage capacities for 1.4 million tons have been commissioned, including for 0.5 million tons at the expense of KazAgro.

Amend and update laws
Grain producers have repeatedly requested revisions to the law “On mandatory insurance in crop farming,” which has been in effect since 2004. Farmers are not satisfied with the target system—the cost recovery instead of lost profits – nor with its execution. Insurance companies are not interested in this kind of activity, despite the fact that the state reimburses them for half of their payments to policyholders. In 2012, insurance covered 13.9 million hectares or 74.2 percent of the 18.8 million hectares of crops to be insured. Now a new bill is being drafted to improve the mechanisms of crop insurance (reinsurance mechanisms, establishing fixed-tariffs mutual insurance companies and other changes).

Another bill already under consideration in the Mazhilis aims to fill gaps in the regulation of the grain market. The draft law “On amendments to some legislative acts of the Republic of Kazakhstan on regulation of the grain market” provides a number of conceptual amendments, including the introduction of compulsory insurance of civil liability of grain reception centres to the holders of warehouse receipts, improving mechanisms for the interim management of elevators and strengthening state control over the storage of raw grain.

Kazakhstan also developed and then ensured the adoption of technical regulations on grain security, which will ensure the free movement of grain in the Customs Union and simplify procedures for confirming compliance.

Prevent dumping prices
At the enlarged session of the government held on January 23, President Nazarbayev instructed the government to study the issue of creating a single grain holding. This initiative will be implemented through the voluntary union of the grain market’s participants in a consortium grounded by JSC National Food Corporation, which already has terminals and elevators. Creating a holding company will consolidate all grain producers in a consortium whose task is to sell their common product at a profit. The participants of the consortium at the same time will retain their legal independence. Small- and medium-sized grain producers of this association will benefit significantly, in particular through guaranteed sales of autumn grain at market prices and a share of export earnings.

The new formation will contribute to the public policy of diversifying crop production, including through the funding of sowing and harvesting, as well as the guaranteed purchase of manufactured products.

The author is the Minister of Agriculture of Kazakhstan.