By Gulnaz Kalikhanova in International on 15 May 2013

ASTANA – Kazakhstan’s Minister of Foreign Affairs, Erlan Idrissov, began his official visits to Spain and Portugal on May 13 seeking to advance both political and economic ties, and promote the upcoming international specialized exhibiton EXPO 2017 in Astana. 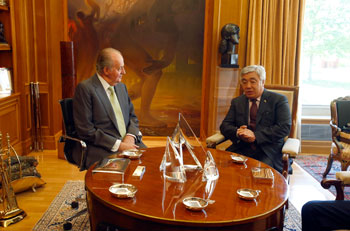 King Juan Carlos I warmly received Foreign Minister Erlan Idrissov in the royal palace in Madrid on May 13 as they discussed the continued expansion of bilateral ties between Spain and Kazakhstan.

On May 13-14, in Madrid, Idrissov met King Juan Carlos I, Senate President Pio Garcia Escudero, President of the Congress of Deputies Jesus Posada, Foreign Minister Jose Manuel Garcia-Margallo, and heads of leading Spanish companies. The Spanish Prime Minister Mariano Rajoy’s planned visit to Kazakhstan in the autumn of this year was one of the main topics of discussions.

The two countries established diplomatic relations in February 1992. Spain is one of Kazakhstan’s key political partners in Europe. It was the second European country that signed a strategic partnership agreement with Kazakhstan back in 2009.

In preparation for Mariano Rajoy’s upcoming visit, officials of the two countries reviewed the progress achieved in implementing agreements reached during Kazakhstan President Nursultan Nazarbayev’s visit to Spain in February this year.

The high-level discussions also covered topical issues of bilateral cooperation in politics, trade, economy and culture, as well as of interaction within international organizations. As part of the visit, the ministries of foreign affairs of Kazakhstan and Spain signed a memorandum of cooperation.

Minister Idrissov opened a meeting of the Kazakhstan-Spain business council. Heads of leading Spanish companies, brought together under the Spanish Confederation of Business Organizations, participated in the meeting.

A steady growth of bilateral trade, which in 2011 amounted to US$1,285 million, is the evidence of the increasing trade and economic relations between Kazakhstan and Spain. The commodity structure of trade is very stable. Oil and oil-based products make up the bulk of exports from Kazakhstan to Spain, along with base metals, hire and lead. The imports from Spain include industrial, agricultural, and medical equipment, vehicles, and chemical products.

A rather large number of small and medium Spanish enterprises operate in Kazakhstan, in addition to prominent companies such as Indra, Talgo, Imabe Iberica, Maxam, Repsol. Spain is one of the world’s recognised leaders in producing energy from alternative sources which bodes well for its companies’ participation in EXPO 2017 in Astana which is going to be focused on the subject of Future Energy.

Following his meeting with Idrissov, Senate President Pio Garcia Escudero said Spain will help Kazakhstan in organising EXPO 2017, given its own rich experience in holding both World Expo in Seville in 1992 and International Specialised Exhition in Zaragoza in 2008.

While in Madrid, Idrissov also held talks with Executive Director of World Tourism Organisation, Zoltan Somogyi, and participated in a conference entitled “Kazakhstan in the modern world,” which was organised in cooperation with the Elcano Royal Institute.

Following Spain, Idrissov will pay an official visit to Portugal on May 14-16.

In Lisbon, the minister is set to meet President Anibal Silva, President of the Assembly Maria Esteves, and Minister of State and of Foreign Affairs Paulo Portas. The sides will discuss topical issues of bilateral relationship and identify concrete prospects of further cooperation.

In addition, a Kazakhstan-Portuguese business seminar will take place during the visit. Businesses from Kazakhstan and representatives from Portuguese companies working in Kazakhstan that are interested in cooperation development will attend the seminar. The first such seminar was successfully held in Lisbon in December 2011.

The diplomatic relations with Portugal were established in August 1992. The political relations between the two countries are developing steadily and high-level contacts have become regular in recent years. The leadership in both countries is committed to the full development of mutually beneficial multidimensional cooperation. Bilateral trade and economic cooperation has got a lot of potential as well. In 2012, the trade turnover exceeded US$1 billion. The gross inflow of direct investments from Portugal amounted to US$42.2 million.