ASTANA – “Harmony Lessons” continues its triumphal tour around the globe, winning the Special Jury Diploma for best directorial debut at the Tribeca Film Festival, which was held from April 17-29 in New York City. 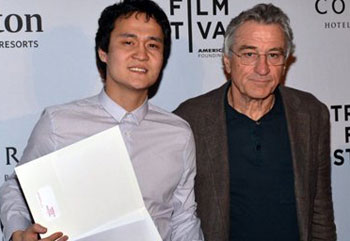 Emir Baygazin (l) was warmly welcomed at the Tribeca festival by viewers and movie celebrities including Robert De Niro.

Before the opening of the festival, The Village Voice included the film in its list of the ten festival must-sees. In total, 89 films were shown during the Tribeca Festival this year. A review on the American website Twitch calls “Harmony Lessons” “deceptively humorous,” comments on the director’s ability to get remarkable performances from his nonprofessional actors, and declares the director, Emir Baygazin, one to watch.

“We are very pleased that the American premiere will take place at the Tribeca Film Festival in New York, which is by far the most prestigious in America. In this year’s jury are such well-known filmmakers as Whoopi Goldberg and Paul Haggis,” the film’s producer, Anna Kachko, told reporters ahead of the event.

She noted that the successful performance of the movie in the main competition of the Berlinale Festival, where it got Silver Bear for camera work, garnered it more than 40 invitations to international festivals.

“A special screening was organised on the eve of the premiere for U.S. and international media who praised the great picture and the director. New York Magazine published a short list of must-see movies at the festival and included ‘Harmony Lessons’,” she stated.

The film depicts a Kazakh province where the protagonist, Aslan, lives and struggles unsuccessfully for contact with his peers. Timur Aidarbekov, a student at an orphanage, plays Aslan.

The story is a dark one of isolation and murder.

“For me it was important to build the drama in a way that didn’t draw attention to the murders committed by the protagonist. The picture says more about how the idea is born to get rid of another person. As in the first murder, my protagonist tries to survive. We need to understand that we live in such a world, and in such conditions, and we are forced to survive,” says the film’s director.

“Harmony Lessons” also depicts prison abuses; however, at a press conference Baygazin stressed that those scenes were not made in order to condemn violence in prisons, but rather the opposite.

“I shot this movie in a difficult time for myself… It was so important for me to be spiritual, to express their thoughts, so I did not show the murder of a person, but rather demonstrated realistically the murder of a sheep. But that’s why people always talk about the murdered ram, and do not remember, for example, the cockroaches, which were also killed—we are all killers,” the director said.

In an interview, cinematographer Aziz Zhambakiyev said that he had a good rapport with Baygazin. Zhambakiev was awarded the Silver Bear for an outstanding achievement in cinematography.

“Emir clearly explains what he wants to see. If not for the taste and sense of harmony of Emir, the movie would not be the way it is now,” Zhambakiev said.

“Harmony Lessons” is the first film from Kazakhstan to have been accepted into the Berlinale Festival and is considered a great achievement for the nation’s young film industry. Few people expected that the jury, headed by Hong Kong director Wong Kar-Wai, would award a prize to a beginner. When the name of the Kazakh cinematographer was announced on the stage of the Palace of Festivals, the hall with 1,600 guests exploded with shouts of delight and applause.

Emir Baygazin is Kazakh actor and film director. He was born in Alga, Aktobe region. From 2002 to 2004 he studied at the acting school at the Akhtanov Aktobe Drama Theatre.