The three chicks born on May 3, organisers hope, will mark the resurgence of Kazakhstan’s golden eagles. The chicks are the first of eight that are planned to be hatched and set free as part of the Make Your Contribution: Save Nature project developed and implemented by the Institute of Zoology of Kazakhstan, the company Efes Kazakhstan and the Sunkar nursery for birds of prey outside of Almaty.

The chicks have big, sharp beaks, black eyes and bodies covered with white fuzz that turns greyish on their backs. The weight of the largest was 100 grams. The chicks are all being observed by ornithologists, who are generally pleased with their condition.

The health of newborn chicks is generally determined by their eating and digesting processes.

The golden eagle eggs were hatched in an incubator to ensure optimal conditions for their development. With precise temperatures, humidity and air circulation and regular turning of the eggs, incubators increase the chances of hatching a healthy chick up to 95 percent. Golden eagles, unlike other birds of prey, are very sensitive to human presence during their nesting period.

Eight birds are planned to be set free within the framework of the Make Your Contribution project. Scientists and employees of the nursery will feed the birds and help them develop under natural conditions. This means supplying food without bringing the birds into contact with humans and taking other precautions to ensure that the birds are ready for life on their own when they are released.

Kazakhstan’s population of golden eagles has decreased lately because of insufficient food supplies, fires, high-voltage power lines and human activities like building resorts, particularly in the highlands. The mere presence of humans can cause the birds anxiety and disrupt their breeding. The project to study the birds from birth started in July 2012 with the selection of four pairs for breeding the chicks. They were placed in a separate aviary and recorded constantly for three months. Following the results of ornithological research conducted in the summer of 2012 in the south, southeast and east of Kazakhstan, about 650 golden eagle couples critical for the preservation of the population were discovered. 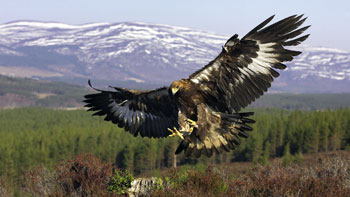 Sunkar nursery is a unique facility, having focused over its 23-year history on Kazakhstan’s disappearing wild birds. So far, Sunkar’s experts have raised more than 700 wild birds. A total of 500 falcons raised there have been released into the wild. The nursery is especially interested in the endangered golden eagles. By resettling young golden eagles in habitats they had abandoned, the project hopes to restore their numbers.

“Now we have 435 wild birds in our nursery, including golden eagles, saker falcons, hawks and vultures. Each year, we set free 30 percent of the chicks that we are breeding. Sunkar is the largest exporter of hand-reared wild birds in Kazakhstan. The nursery is registered in CITES (Convention on International Trade in Endangered Species of Wild Fauna and Flora) and according to the conclusion of its experts, is recognised as one of the best nurseries of the world,” said Sunkar Director Ashot Anzorov.

In addition to birds, Sunkar breeds Tazy (Kazakh hounds) hunting dogs and horses. The nursery became a popular place for excursions, where visitors can watch falcons and golden eagles are being trained.