Getting Wet in the World’s Largest Landlocked Country

Kazakhstan is known for many things. It has a vast ancient steppe that stretches nearly the size of Western Europe. It has a new capital designed by the world’s greatest architects. It is also the world’s ninth largest country and the planet’s biggest landlocked nation. 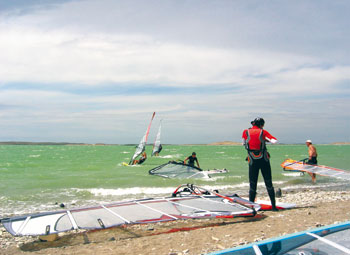 What it is not known for, however, – and logically so – is water sports. But this vast ancient land is filled with rivers and lakes and wind and a community of diehard water sports fans who have found a way to enjoy the water in a location as far from the ocean as you can get.

There’s a spot on the Kapchagai Reservoir where the wind starts blowing at 6 a.m., reaching 18 meters per second. By noon, this steppe wind raises waves two and three meters high. Artyom and Denis Chibisov, brothers from the Kapchagai area who have been coming to this spot for years, will tell you that this is one of the most popular spots among Kazakhstan’s growing number of windsurfing fans.

Kapchagai is a big place. The Ili River pours into the Kapchagai Gorge, where a dam subdues it and creates huge Kapchagai Lake, stretching about 100 kilometers long and 25 kilometers across. Shallow sections and nearby resort pools are enough for most visitors from Almaty, 70 kilometers away. But for the new generation of water sports fans, it’s the lake’s wind and waves that keep them coming back. “It’s just you, a sail, a board, and nature—one on one!” the brothers told EdgeKz.

The brothers have travelled as far away as Egypt to windsurf, have participated in international competitions, and even won awards. They’re big promoters of the windsurfing scene in Kazakhstan and of Kapchagai’s planned new windsurfing station, which will offer equipment and coaches. But windsurfing in Kazakhstan isn’t all new school. Windsurfer Alexander Voronin also got his start at Kapchagai. He’s been windsurfing since before anyone in Kazakhstan knew what it was. “In the 1980s… not many people knew about it. The equipment was completely different than it is today. The boards were big and heavy. The sails were delicate and often broke.” Eventually he took matters into his own hands and opened a shop to sell the equipment he wanted. Today, it’s Alexander’s company Alex Grand KZ (www.alexgrand.kz) that will open the windsurfing station in Kapchagai. “We are totally sure windsurfing in Kazakhstan will get more popular every year,” he told EdgeKz. 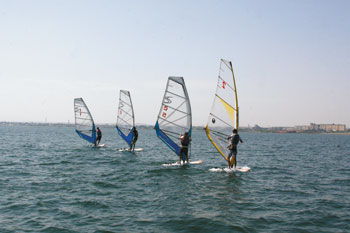 Windsurfers enjoy the breeze on the Kapchagai Reservoir in the Almaty region.

Aleksey Lichman is a 39-year-old skier who says he was lost without some intense, nature-based activity to keep him going from snow to snow. That is until someone told him to try windsurfing. “Despite numerous falls and a lot of water consumed, I liked it,” he said. So he continued, despite a lack of training and equipment. “It’s a good way for me to get my dose of adrenaline.”

In addition to Kapchagai, many of Kazakhstan’s other lakes offer the key elements of windsurfing: water, wind and beautiful scenery. Balkash Lake, Bartogai Reservoir and Alakol Lake all draw their share of windsurf junkies. Balkash is Lichman’s favorite. “It is quite large, and the wind and nature make nice, dynamic scenery… The thermal wind blows from noon to sunset, plus other winds that come from air traffic and weather changes.”