Folk Music Festival to be Held in Kyzylorda in 2014

KYZYLORDA – The Aral Sea region has begun preparing to hold the Korkyt and Melodies of the Great Steppe international folk music festival for the third time. 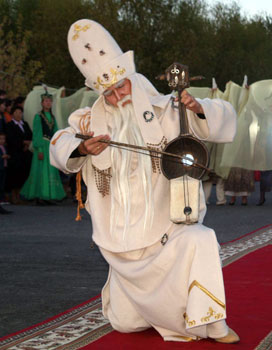 The festival was held for the first time in 2006 as part of the celebrations of the 15th anniversary of Kazakhstan’s independence and had tremendous success. Theatrical performances accompanied by the music of Kazakh dombra and kobyz, Tatar kurai and dumbyra, Uzbek dutar, Tuvan doshas-pulara and shaman drums took place during four days of celebrations that included ancient melodies of Turkic peoples, the sounds of the Azerbaijani five-string saz and performances by Altai kaichi, masters of throat singing.

The open-air gala concert was organised in the middle of the steppe at the Korkyt-ata memorial complex in Karmakshy district, on the former bank of the river Syr Darya, where the great philosopher and founder of Turkish traditional music lived.

Scientists and musicologists from Kazakhstan, Russia, Azerbaijan, the United States, Germany, the United Kingdom, Hungary, Turkey and other countries who arrived in the region to take part in the scientific and practical conference shared their vision of the present and the future of the traditional music of Turkic peoples, recognising its unique place in world culture. Guests were invited to take a tour that showed the rich past of the Aral Sea region: an abundance of ancient settlements and capitals of once-mighty empires.

The second Korkyt and Melodies of the Great Steppe Festival was also held in the region and attended by over 130 participants from the CIS and other countries. Now, at the request of citizens, regional executive authorities have decided to host it again in 2014.

“Preparatory work is already under way,” Deputy Head of the Department of Culture Zhanat Kuramysova said. “The international organisation TURKSOI expressed willingness to help us with the organisation of the festival, which, by the way, has substantially expanded the geography of presentations and performances of our creative teams. This year alone, they have travelled to Turkey twice and visited many other countries that demonstrate high interest in Kazakh traditional musical art.”

According to Kuramysova, the festival will help address another major problem: the reconstruction of the memorial complex of Korkyt-ata in Karmakshy district. Anyone wishing to share his or her vision of what the complex’s new image might be is invited to submit a sketch to the recently announced contest.