ASTANA – In April, Environment Protection Minister Nurlan Kapparov spelled out government strategy on the transition to a green economy at a conference in Astana 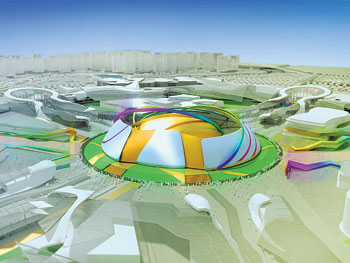 A computer graphic of the proposed pavillions for EXPO 2017 exhibition in Astana.

U.S. Ambassador Kenneth Fairfax also attended the conference entitled “Building a Green Economy in Kazakhstan.” It was organized by the American Chamber of Commerce for Economic Policy in Astana.

The conference focused on the basic principles of the green economy, environmental issues and developing a sustainable energy base.

Kapparov said the government was drafting a national strategy on the transition to a green economy that would solve many economic and environmental problems.

The minister also discussed prospects for EXPO 2017 which will be held in Astana on the theme of the sustainable energy of the future.

“We hope EXPO 2017 will help the international community to develop effective ways to address energy problems,” he said.

Kapparov said the EXPO would showcase Astana as a leader in the global revolution in advanced technology and sustainable development.

“EXPO 2017 will create an unprecedented opportunity for our city to become a leader in this important area,” he said. “We want Astana to be considered not only as the geographic centre of the Eurasian continent, but also as a regional centre of technological, cultural and scientific exchanges between Europe and Asia. The world is waiting for commercially viable projects to demonstrate the various energy options, and Astana can become a platform where we will show the latest developments.”

Kapparov said EXPO 2017 would also lead the transformation into the high tech green economy for the rest of Central Asia.

The conference was the tenth forum held by the American Chamber of Commerce in Kazakhstan.

The forum provided an open dialogue platform to discuss green economy issues and considered other countries’ experience in this field.

Kapparov said that in the transition to the green economy, it would be necessary to change energy policy and increase the share of natural gas in energy production. He said this would “give stability to our economy. We will depend only on ourselves. We will be able to produce more energy from gas and produce fertilizers and other products.”

Environment Protection Vice Minister Bektas Mukhamedzhanov said that existing economic models would have to be reformed and cooperation with other countries in the region would have to be expanded to deal with cross-border energy and environmental problems that were beyond the capacity of individual countries to solve.

The conference also discussed the experience of other countries in trying to make the transition to a green economy and initiatives by international companies to address environmental problems.

On April 15, the environmental protection minister reported to President Nursultan Nazarbayev on progress on implementing green economy policies, the main provisions of the Green Bridge Partnership Programme and planning ideas for EXPO 2017.

President Nazarbayev also instructed the ministry to focus on the rational use of water resources.

Environmental experts believe Kazakhstan possesses unique opportunities to develop a green economy: It has vast territory, a favourable geopolitical position, and the financial and natural resources to develop renewable energy sources to replace environmentally harmful and inefficient power plants. The country will also launch programmes to modernise its housing and public utilities, introduce sustainable practices to manage its pasture lands for herds of cattle and upgrade its water management systems.

The country has passed new laws to promote wind energy, energy saving and the recycling of industrial and solid domestic waste. It has set up a new Interdepartmental Council to integrate green principles into different sectors of the economy.

Kapparov said the government would invest at least 1 percent of GDP per year to finance the transition to a green economy.

“It is yet hard to say how much it will cost to switch to the green economy. But I can say how other countries have done it,” he told the conference. “China, for example, undertook to invest 1.5 percent of GDP into the green economy. South Korea pledged to invest 2 percent of its GDP. Our strategy will show how aggressive we will go. There are many scenarios and we will compare them, but I think we will invest at least 1 percent.”

“We will start this transition after the adoption of a special strategy, so that people understand that it will not happen right away. This will be a long programme aimed for 20 or 30 years,” he said.

The American Chamber of Commerce in Kazakhstan represents nearly 200 member companies including US, multi-national, and local businesses in 30 industry sectors. It provides an opportunity for its members and country government officials to find ways for cooperation and dialogue, promotes an open forum for the exchange of information, ideas, and experience for doing business in the country, and serves as a valuable source of information on useful business contacts and information to investors.