Cycling Culture Speeds Up in Kazakhstan

ASTANA – Over the last 15 years, Astana has become a business and political centre in Eurasia, acquiring innovative technologies and implementing international standards with a Kazakh style. With the growing number of foreign companies in the capital has come an increase in Astana’s population of expats, who bring their own lifestyles and customs. One of these new practices is cycling. As the weather gets warmer, guests and more and more long-time Astana residents are hopping on bicycles. Though Astana still lacks bicycle paths and separate lanes for cyclists, people are still starting to switch from driving to riding. For visitors, renting a bike is a great way to tour Astana’s modern architecture. 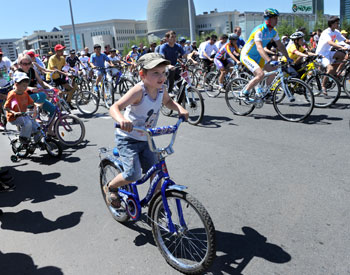 Cycling is becoming more attractive in Astana as both a pleasant pastime and means of transportation.

In 2011, Mayor of Astana Imangali Tasmagambetov announced that cycling infrastructure would be developed within the General Plan of Astana. This was declared after city residents complained about a lack of bike paths in the city.

In 2012, representatives of the Embassy of the Netherlands in Astana offered assistance in developing and promoting cycling in the city.

Deputy Head of Mission Harry Putker has been living in Astana for a year and commutes to work on the bicycle he brought from Holland.

“Residents of Astana, especially drivers, are not used to driving with cyclists on the roads, thus often creating dangerous situations,” he told a local news channel.

“Everything develops fast in Astana, and for you [residents and officials of Astana] it would be beneficial to gain experience of cycling culture and implement it quickly,” Peter Van Leuven, ambassador of the Netherlands in Astana commented.

The number of cyclists has increased more quickly than cycling infrastructure has been created. Still, one by one, governmental bodies and companies are buying into this new culture, encouraging employees to use bikes instead of cars and starting to create special bike parking lots.

Bicycles are now available for rent in all parks of the city. The average price is 700 tenge ($4.60) per hour. “I do not have my own bike because I live in a flat and don’t have a place to keep it. Renting is convenient for me, and taking into consideration the relatively low prices and my infrequent use, I feel it suits me,” Astana resident Abzal Ospanov said.

The London Olympics helped present the benefits of cycling to Kazakhstan’s citizens in terms of improving health, protecting the environment and limiting traffic. 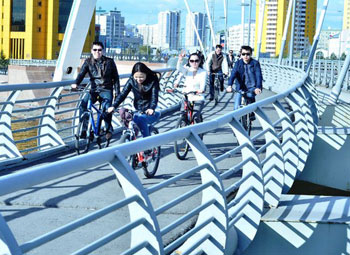 “In London, for example, most of the streets lack bike lanes, but drivers are very aware of cyclists. We must inculcate this culture in our local car owners, that cycling is not only a sport, but has become a popular means of transportation for the residents of Almaty,” Mayor of Almaty Akhmetzhan Yessimov said.

According to doctors, cycling brings enormous health benefits. During a bike ride, leg muscles strengthen and increase their endurance, both the cardiovascular and respiratory systems are strengthened and blood is enriched with oxygen, which spreads to brain cells and other vital organs. Cycling is especially useful for smokers, as the strong aeration helps purge the toxic substances left behind by cigarette smoke. It also boosts the immune system.

Among developed countries, bikes are most popular in Western Europe, where 115 million people have them. Denmark is the most bike-crazy nation: the average Dane rides 893 miles a year. Bicycles are not a luxury item there, but a way of life. The Netherlands, of course, is also recognised as a bike-riding nation: in this small and mainly flat country, the popularisation of bikes has become government policy. The development of their use is given 10 percent of the cost of transportation.