By Marina Parkhomenko in Culture on 15 May 2013

ASTANA – “The new generation of computer games are not only unsafe for children’s health, but also for their souls,” Raisa Sher, head of the Committee for Children’s Rights under the Education and Science Ministry, told The Astana Times. 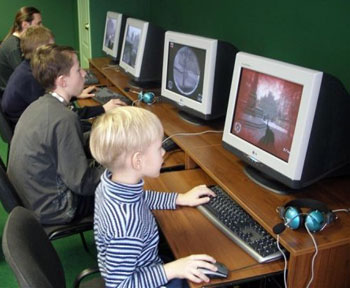 Kids in Kazakhstan, like hundreds of millions around the world, have taken to playing computer games with gusto. Alas, with all the negative consequences this brings.

A three-year-old child with an iPad in her hands instead of a toy is no longer a surprising sight, and persuading a kid to watch a children’s film instead of spending hours in the virtual maze seems a hopeless effort. Naturally, in the age of IT, life is unthinkable without computers, iPhones, iPads and other modern digital gadgetry, but something can and must be done to stop the children from falling into complete dependence on technology and their losing their sense of reality.

According to research, 80 percent of 12- and 13-year-olds are computer addicts, sitting at their monitors for days without food or rest. The situation seems alarming.

What is the harm to health of “shooters” in role-playing games?
Gaming addiction is already recognised by the World Health Organisation, on par with drug addiction and alcoholism. And it is hard to treat this dependency. Children sitting up too late at night at the computer don’t get enough sleep, fresh air; their biorhythms are disturbed. And role-playing computer games contribute to an aggressive form of dependency, alienation from public life and depression.

According to the National Research Centre for Psychiatry and Psychotherapy, children with behavioural disorders due to computer addiction often skip school and run away from home to play in the clubs at night. Approximately six percent of them have psychological deviations, impaired consciousness, loss of orientation, hallucinations spawned by gaming addiction. Here is an example: a 13-year-old boy spent three days in one of the computer clubs of Almaty. When his parents finally found him, he had no idea where he was. It took a few days to get him out of that state, out of the world in which he was a hero of games, fighting an enemy visible only to him. Other health impairments found in the research are headaches found at 20 percent of the quizzed children, 33 percent complained of eye fatigue and five percent of bad sleep.

But that’s not all. Almost all the clubs are short of proper catering facilities, selling only soda, tonics, chips, crackers, chocolates… especially dangerous to children’s health.

Children who prefer violent games are more aggressive, extremely rude, irritable, insensitive to loved ones; their world shrinks to the size of the monitor screen and they are more prone to suicide. In 2012, 205 cases of suicide among minors were recorded.

What has to be done to combat it?
First, we need to start the practice of licensing computer clubs and do this work within the relevant regulations. And computer clubs ought to be monitored by the public and nongovernmental organisations, too. We need a scaled awareness campaign in the media.

International experience in the area would be useful. In Germany, a special organisation helps people get rid of addictions to computer games. Furthermore, Internet sites breeding violence, cruelty and other anti-social phenomena and hosting pornography must be closed to children.

We have repeatedly brought up in the government the need to regulate by law the information safety of minors and establish an office to run this. And it is very good that the bill “On the protection of children against information harmful to their health and development” is already in Parliament.