ASTANA – In a recent interview, the chairperson of the Interstate Aviation Committee (IAC), which oversees civil aviation in the Commonwealth of Independent States, said Kazakhstan’s civil aviation has seen strong development since the country gained independence. 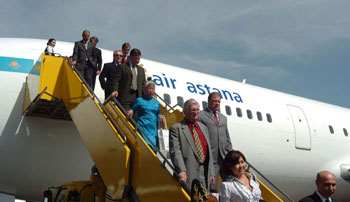 The civil aviation of Kazakhstan meets international standarts after its full modernization.

“Kazakhstan has been in the structure of the Interstate Aviation Committee since its establishment in 1991. President Nursultan Nazarbayev was one of the initiators of establishing the organisation. Obviously, many changes have taken place in the sphere of civil aviation over the years; I would even say that aviation itself has changed. Now, we have modern planes and airports, a high level of service and flight safety – that is the most important. In my opinion, the infrastructure of civil aviation in Kazakhstan has been dynamically developing over recent years,” Tatyana Anodina, doctor of engineering, professor, winner of the E. Warner Award of International Civil Aviation and chairperson of the Interstate Aviation Committee, said during a recent interview in which she discussed the prospects and level of development of aviation in Kazakhstan.

Dr. Anodina also noted several issues which it would benefit civil aviation to solve: “It is not a secret that the acceptance rate of airports has been a problem for aviation in Kazakhstan, and so it remains. It slows down the process of development of regional-level and international-level flights. As far as I know, the government of the country has already set a task to double the acceptance rates of the airports of Astana and Almaty over the course of two years. Besides, all regional airports are expected to meet the international standards (IATA Safety Audit for Ground Operations) ISAGO.”

“The winds of change have brought only good and progress to Kazakhstan when it comes to aviation,” she continued. “Radical changes have affected all areas of the country’s civil aviation. For example, Astana and Almaty airports were certified by the IAC for all-weather flights in accordance with the third category of the ICAO [International Civil Aviation Organisation]. Air terminals were built, service culture improved as well as navigation and air traffic control facilities were constructed.”

She also underlined that at present, the government of Kazakhstan is setting even more ambitious goals to equip and certify all the nation’s airports in accordance with ICAO standards.

She has also noted the new human capital in the field. “A new generation of aviation professionals has been trained at the National Academy of Civil Aviation in Almaty. I know that the government plans to allocate more than three billion tenge for the training of specialists in this sphere. The IAC also contributed to preparing Kazakhstan’s specialists in the sphere of flight safety within the ICAO-MAC international project, in which the United States, EU countries, Russia, Kazakhstan and others are taking part.”

“The civil aviation of Kazakhstan is expected to keep this pace of development, taking into account the measures put in place by the President and the government of the country for its continuous support,” Dr. Anodina concluded.