ASTANA – On May 25, the Week of African culture was launched in Astana. The celebrations were dedicated to the 50th Anniversary of the African Union. 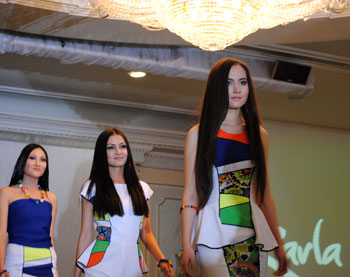 Models show African fashion garments at Radisson Hotel on May 25.

The first day of the celebrations took place at Radisson Hotel. Egyptian Ambassador Mrs. Nabila Ibrahim Salama Farhana, the Charge d’Affaires of the Embassy of Libya Abdalkrim A. K. Alsuwadi, South African Ambassador Shirish M. Soni and the Radisson General Manager Jasper Francl opened the celebrations. Guests were entertained by an Egyptian dancer, who performed national men’s dance with skirts called Tannouri and by an African master jumbo player. Apart from that, the best garments from African designers were presented in the frames of the African Fashion Show. At the end, a children’s ensemble in colourful national outfits performed the energetic Waka-Waka dance with the spouse of South African Ambassador Mrs. Ruwaida Soni who inspired many guests to get up from their chairs and start learning the moves.

The Day of Africa was continued at the Khan Shatyr shopping mall the next day as a flash mob event for all the shoppers at the mall. It extended the culture to local population and spread the positive vibe with the same programme.

Both events were celebrated on a high level and let the guests experience and discover the exotic African culture.

Each year African countries celebrate this day with great hope, believing that African continent will rise and finally overcome the poverty, the spread of diseases, and the peace would be established on the continent. This year the Embassies of Egypt, Libya and South Africa hosted the two day celebration in order to promote the African culture in Kazakhstan and make this event memorable.