ASTANA – On May 21-22, the first International Astana Smart Technologies Exhibition and Conference (ASTEX 2013) took place within the framework of the Sixth Astana Economic Forum (AEF) at the Palace of Peace and Harmony in Astana. 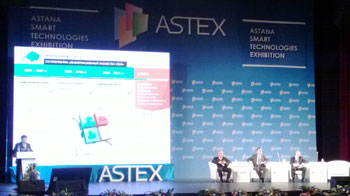 Representatives of 28 local and foreign companies promoted their developments in the IT industry at the first ASTEX exhibition.

The event was aimed at promoting information and communications technologies (ICT) in the operational processes of enterprises of priority sectors of economy; increasing ICT usage by the local population; transferring technologies, knowledge and experience of major international ICT companies and creating a dialogue platform to forge partnerships between Kazakh and foreign ICT companies.

The event brought together around 50 information technology experts from all over the world, including government officials, foreign company executives, major investors, internet business players, professors and business trainers.

A total of 28 local and foreign companies participated in the exhibition, including the world’s leading website for selling cars, Cars.com; a leading U.S. online store, Newegg.com; a major Swedish company for mobile apps, software and online platforms development, OpenRatio; companies with innovative designs such as Microsoft, Asus, Logycom, SAP and others and domestic companies including mobile operators Kcell, Beeline, Kazakhtelecom and others.

As the organisers had hoped, the ASTEX Exhibition and Conference provided an international communication platform to share expertise and discuss the most relevant issues in the industry, and served not only as a large exhibition pavilion for smart technologies but also as a venue to conclude memoranda and agreements, make business connections and establish long-term partnerships.

Among the issues discussed were innovative developments and high-tech solutions in various fields such as e-government, education, health, e-business, mass media, entertainment, agriculture and transport. The exhibition showcased more than 100 developments in the IT industry, global brands’ fresh innovations in smart technologies, humanoid robots and more. Manufacturers from Kazakhstan, Russia and Belarus exhibited their works.

Asus presented its new PadFone Infinity at the exhibition. It is a modern LTE-smartphone with a five-inch display and a metal case, which can be converted into a 10.1-inch tablet through its PadFone Infinity Station. It runs Android 4.1 and features high performance thanks to quad-core processor Qualcomm Snapdragon 600. The battery life of the smartphone talk time on 3G is up to 19 hours. The product will be available in June. The recommended price for the complete set is 175,000 tenge.

The conference included four sessions aimed at improving people’s lives using smart technology which were named accordingly: Smart Government, Smart Industry, Smart Business and Smart Life. Each session was divided into several sub-sessions, where the possibilities of ICT were discussed in detail. Presentations, seminars and workshops by famous Kazakh and foreign speakers were also submitted at the conference.

At the opening ceremony, First Deputy Prime Minister and Minister of Regional Development Bakytzhan Sagintayev pointed out that today, Kazakhstan is an established and modern state, a responsible partner in the international arena and a stable area for investment, especially for the development of information and communication technologies.

“Striving to apply the latest technology, we have already achieved good results. Thus, according to the U.N. rating “E-government for the people” in 2012, Kazakhstan ranked 38th among 190 countries. According to the Network Readiness Index of the International Telecommunication Union, we took 43rd place. According to the index of e-participation, Kazakhstan and Singapore shared second place.”

“The number of Internet users in Kazakhstan exceeds 65 percent of the population,” Sagintayev continued. “The country has implemented standards for third generation mobile communication—3G—and launched a project to create a fourth-generation network, 4G, which is already being implemented in Astana and Almaty. Complete coverage is planned for the end of 2017. In addition, we expect to achieve 95 percent coverage of digital television and radio broadcasting in 2015. Hundred percent of the population will have access to satellite and digital broadcasts.”

He also noted that work with cloud computing technology is underway. Experts believe its implementation in the short term will help increase the efficiency of enterprises and the state as a whole.

In his welcoming speech, Deputy Minister of Transport and Communications Saken Sarsenov stressed that e-licensing in Kazakhstan was named the best project in the E-Business category among 280 projects from 64 countries at the WSIS Project Prizes 2013 international competition in Geneva. (www.elicense.kz is an electronic system that allows users to obtain various permits via the Internet).

He also discussed the achievements of and prospects for the development of ICT in Kazakhstan and noted that the implementation of a number of public and industry programmes has given a powerful impetus to the development of the ICT industry. As of last year, revenues have grown to one trillion tenge in this sector.

In particular, Sarsenov said that this year all regional centres are planned to be connected to digital terrestrial broadcasting, and it is expected to cover 95 percent of the population by 2015. Sarsenov also said that Kazakhstan plans to introduce Big Data technology, allowing the processing and storage of larger amounts of information. Big Data is currently one of the most dynamically developing technologies in the world.

Sarsenov noted that an analysis conducted by the International Data Corporation shows that the amount of stored information increases by 40 percent annually. For instance, 2.43 zettabytes (one zettabyte equals one billion gigabytes) of information were generated in 2012. This is double that of 2010.

Experts believe application of Big Data technology will help make the state administration more efficient. For example, in Vitoria da Conquista, Brazil, school students have microchips using Big Data technology embedded in their school uniforms. The microchips recognise children when they enter schools. Parents will get a text message if their child is late for classes.

Deputy Minister of Transport and Communications Sarsenov said the Ministry has a goal to introduce Big Data technology in the country and make Kazakhstan a country with a well-developed ICT sector.

The Open Data draft portal was also presented at the exhibition. The opportunities that the portal provides were demonstrated using the prototype portal data.gov.kz developed by the National Information Technologies JSC.

Kazakhstan is the first Central Asian country to put forward an Open Government initiative. The project will be implemented within the 2020 State Programme for Information Kazakhstan.

The open data portal will provide information about all state bodies in the country available for all users of the portal regardless of their citizenship and location. The users will be able to generate, edit and return information to the database as well as unite it with other data for receiving new information. Based on this information, IT companies will be able to create interactive applications useful for people in everyday life.

Speaking at the presentation of the portal, Chairman of the Board of National Information Technologies JSC, Ruslan Yensebayev, described one such application called Government Agencies Navigator. “The application can help us find the nearest office of an organisation we are looking for if we know its address, name and our location. For example, we can find the nearest notary office to attest a document or a school for our children. The information is already on the portal so everyone can use it,” he said.

He also noted that e-government in Kazakhstan is focused on its citizens.

“Kazakhstan is in step with the times and it will become a leader in the field of information technology and, particularly, in e-government, in the future,” he said.

In his turn, Minister of Transport and Communications Askar Zhumagaliyev spoke about the development of information and communication technologies and stressed the importance of introducing smart technologies in every area of the modern state’s life.

The most striking trends, development forecasts and future perspectives in technologies, and other subjects were also discussed at the session.

The heads of sector-specific agencies of the Commonwealth of Independent States countries and CEOs of international trade organisations attended the plenary session as speakers and the founder of Cars.com and current CEO of Newegg.com, Bob Bellack, and the founder of OpenRatio, Rabih Kanaan, shared their secrets of doing business with Kazakhstan’s people.

The first ASTEX 2013 Award was awarded on the second day, when memorable prizes went to Best ASTEX 2013 Blogger and Startup Project, as well as to the best Kazakh IT managers in the government and the corporate sector and in small and medium-sized businesses.