ASTANA – The captain of the Astana Cycling Team, Italian Vincenzo Nibali won the cycle race Giro d’Italia on May 26. 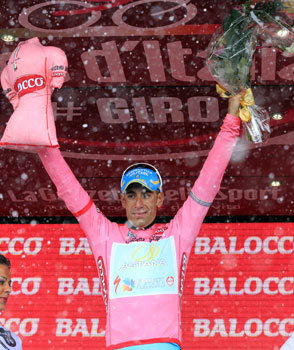 Vincenzo Nibali proudly celebrates after his victory in Giro d’Italia

Nibali took the pink jersey after the eighth stage and never left it until the finish of the race. In the general classification, Italian beat Colombian Rigoberto Uran (Sky Team) by four minutes 43 seconds, while he beat Australian Cadel Evans (BMC Racing Team) by 5.52 min. On Saturday, May 25, Nibali won the penultimate stage of the race, virtually guaranteeing him the first place.

Super multi-day race “Giro d’Italia 2013” started in Naples in early May and ended on May 26 in Brescia. Nearly the entire route of one of the longest races took place on the roads of Italy, but two stages crossed into France.

As race leader, 28-year-old Nibali, who was born in Sicily, was more concerned with staying out of trouble and making sure he reached the finish line unscathed to collect his second Grand Tour victory, to add to his win at the 2010 Vuelta a Espana.

“I’m very happy,” he said. “It was a really unique emotion hearing all the fans cheering for me. I really enjoyed this stage. It was unbelievable seeing all those people along the road. This victory crowns a life’s dream.”

“I’m very emotional. It is beautiful, the whole team was very strong and they’ve done a great job all along. It is a beautiful day for me,” he concluded.

General Manager of the Presidential Professional Sport Club Astana Aidar Makhmetov congratulated the people of Kazakhstan people in his Twitter post: “I congratulate all the people in Kazakhstan with the great victory of the Astana cycling team captain Vincenzo Nibali,” he wrote.

Rob Hayles, Former GB cyclist, BBC Sport commentator said, “As for Nibali, what more is there to say? He was just better than everyone here.”

To recall, on May 18, Vincenzo Nibali finished in seventh place and 54 seconds behind the leader before the last day of rest in the Giro d’Italia.

The winner of that stage of the super-cycle, multi-day race Giro d’Italia was Italian Giovanni Viskonti from the Movistar Team, who pulled away from the group long before the final denouement. Still Astana team was in complete control of what is happening with the general group and did not allow any of Nibali contenders for the general classification lower the gap with their captain. The Italian himself attacked only 2.5 miles before the finish line, coming to the line in the seventh place. 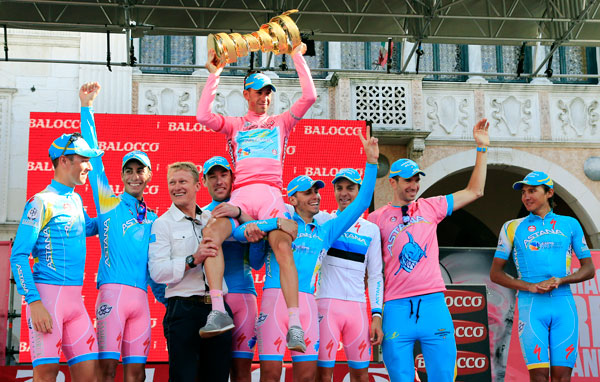 Astana Cycling Team celebrates the victory of its captain Vincenzo Nibali, held up, among others, by Aledanxer Vinokourov, London Olympic Champion.

The most difficult challenge during the race was the cold, but fortunately, the roads were dry, no rain or snow.

Nibali covered the 149-kilometre distance from Cesana-Torinese to Col du Galibier in four hours, 40 minutes and 52 seconds. Colombian Carlos Betancourt of Ag2r followed Visconti across the finish followed by German Pole Przemyslaw from team Lampre-Merida. Six days remain in this year’s Giro d’Italia, which finishes in Brescia on May 26.

The route of the 2013 Giro d’Italia has been officially presented in Milan, with race organisers balancing the traditionally mountainous route with 88.9 km of time trials, in a clear attempt to attract big-name stage racers such as Bradley Wiggins, Ryder Hesjedal and Vincenzo Nibali.

This year’s Giro d’Italia was set to be one of the best ever editions of the Corsa Rosa, promising three weeks of great racing with the Italian countryside as a stunning backdrop.

Race organisers have managed to attract the best ever teams for the 96th edition of the Giro d’Italia, with a star-studded start list including overall contenders, many of the world’s best sprinters and a host of riders chasing stage victories and glory during the three weeks of racing.

The 96th edition of the Corsa Rosa covered 3,405 km, starting in Naples with a 156 km road race stage on Saturday May 4 and ending on Sunday May 26 in Brescia, with a final road stage and five laps of a city centre circuit. The average stage distance was down to 162.2 km a day.

The route was balanced with seven mountain finishes but also a 17.4 km team time trial on the island of Ischia on stage 2, a 55.5 km individual time trial from Gabicce Mare to Saltara on stage 8 and a 19.4 km mountain time trial on stage 18.