ASTANA – On May 18, Astana residents with citizens in cities around the world joined celebrations of Olympic Run Day. The event, held near the Baiterek Tower, was the first of its kind to be held in the streets of Astana’s Left Bank. 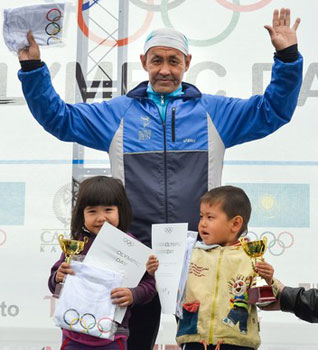 Olympic Run Day, organized by local government officials and Kazakhstan’s National Olympic Committee, attracted more than 2,000 runners, who were offered the opportunity to participate in two races of different distances. Participants who ran the 800-metre race began in front of the Keruen shopping mall, while runners in the 2,400-metre race stared from the Khan Shatyr shopping center. Both races finished in the square in front of the Baiterek Tower.

Students of secondary and sports schools were the first to start. In the 800 metres, Azhar Kyrykbay from Republican sports boarding school and Temirkhan Zhamantaev from school No 24 were the first to cross the finish line in their categories.

The 2,400-metre race included only a single group start. More than 700 runners started the 2,400-metre race and the first to finish was Almas Alpysbayev from Humanitarian College. Among women, local athlete Ulbolsyn Dzhupaeva was the winner.

The Olympic motto, “The most important thing is not to win but to take part!” is also the slogan for Olympic Run Day, and, therefore, each participant received a certificate of participation. Prizes were also awarded to the eldest and the youngest participants. Sixty-five-year-old Ameulsin Mirosinasenko participated in the 2,400-metre race and proved sports can be enjoyed by all ages. This was also confirmed by four-year-old runner Umar Khamidolla and three-year-old Talgatbek Khamza who were willing to stand up at the start along with the adult participants.

This celebration of the Olympic spirit was a colourful and memorable event, and proved that the athletic drive is alive and well in Astana.