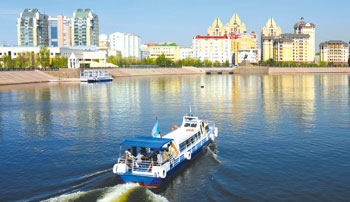 The WTCF is one of the largest groups of its kind in the world. It comprises 56 major cities including Los Angeles, Rome, Berlin, Macau, Beijing, London and Vienna. Astana is only the third city in the 12-nation Commonwealth of Independent States (CIS) to become a member, following Moscow and Minsk.

“I am pleased to offer your city to join the WTCF. I am convinced that by joining the Federation, your city will represent and share its successful experience in the development of tourism with other member-cities of the organization,” Mayor Wang, the current WTCF Council Chairman, said.

The city government said169 tourist companies are operating in the capital and all of them participate in international and regional tourist exhibitions promoting Astana in the international tourism market.

“The federation aims to enhance cooperation between tourist destinations and serve as a platform for releasing information, promoting projects and boosting the image of its member cities,” Li Xinjian, a professor at Beijing International Studies University and consultant for the federation, said.

The WTCF slogan is “Tourism – Making City Life more Beautiful.” The federation was established by 17 Chinese cities, including Beijing, Tianjin, Chongqing and Guangzhou, and 20 cities in foreign countries, including Los Angeles, Vienna, Moscow and Barcelona. The federation aims to include 100 cities within three years.

Lu Yong, head of the WTCF’s organising committee and director of the Beijing Tourism Development Committee, said cities were the main magnets attracting tourists to countries in large numbers.

“Most of the popular tourist attractions are located in cities and most tourist expenditure is also concentrated in cities. Cities are the core of tourism development. Cities make up the centre of tourism as they are major destinations for many tourists and where they spend most of their money,” he said.

The WTCF will be financed by public and corporate donations, government grants and incomes from the sale of services. It will publish annual reports and statistics on the global tourism market and the development of the world’s major tourist cities.

On June 25, Beijing will host a Xiangshan summit of world tourist cities organized by WTCF and a first plenary meeting of the organisation. The events will then be held annuallyto allow member cities to share their experience and jointly developpolicies.

Lu said the WTCF will have a comparable international status to the World Tourism Organisation, the World Council of Travel and Tourism and the Asia-Pacific Travel Association.