ASTANA – On May 10-11, through a remarkable combination of stamina, strength, prowess, and tactical cleverness by the coaches, the Astana Arlans boxing team beat the Ukraine Otamans 6-5 in the final match of the third season of the World Series of Boxing in Astana. 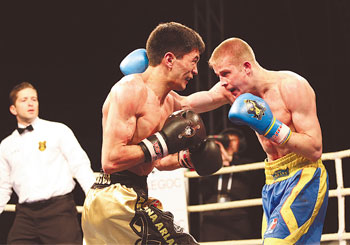 Meirbolat Toitov (l) sent his team on a road to a hard-won victory in WSB finals on May 10 with a resounding win over Ukraine Otamans’ Viktor Gogolyev (r).

At the end of ten bouts, held in Astana’s Sary-Arka velodrome in the presence of up to 6,000 boxing fans, the Arlans and the Otamans were tied 5-5, requiring an additional fight.That fight included Arlans boxer Baghdad Alimbekov and Otamans Moldovan fighter Alexander Riscan in the category up to 54 kilograms.

The Arlans had held back Alimbekov, the WSB third-ranked bantamweight (50-54 kilograms), in anticipation of a sudden death bout. The Otamans, however, had already used their best bantamweight in an earlier fight, which left only 23-year-old, 29th ranked Riscan to compete against the higher-ranked Kazakh fighter. The 29-year-old Alimbekov looked comfortable as he took every round on his way to winning the tournament for the Arlans team.

Although the young Ukrainian bantamweight did not pose a real threat to the more-experienced Alimbekov, Riscan deserves praise nonetheless for the effort he put into the fight.

“I am in an excellent mood,” Alimbekov said after the fight. “You all saw that the fight, for me, developed very successfully. We have been striving for this victory for three years. It was necessary to give our best and to win.”

Upon the unanimous decision giving the fight to Alimbekov, the hall exploded with applause as the Astana Arlans became champions of the World Series of Boxing.

Yet the road to this victory was not straightforward, even during these two days of heavy fighting.

The two days of finals saw fascinating and nail biting fights for fans of both teams and fortunes swung both ways on more than one occasion.

After the first day of boxing, Kazakhstan’s team led Ukraine’s 3-2. 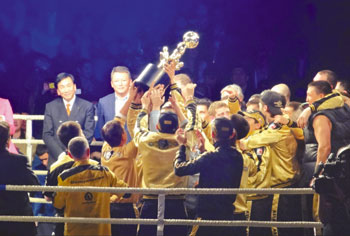 As a result, Ukraine’s team went up 3-2 on the day, and the two teams got tied 5-5, prompting the 11th and decisive bout.

Kazakhstan’s ethnic rock band Ulytau was present to congratulate the winners with one of its riveting compositions sending the roaring stalls in the state of euphoria.