ALMATY – The Park of Innovative Technologies (PIT) located in a special economic zone in the village of Alatau near Almaty is experiencing rapid growth. 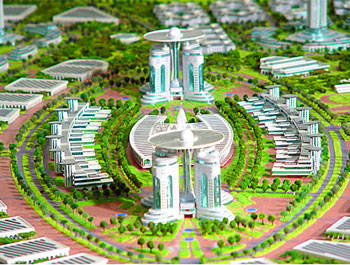 An architectural drawing of a future high tech hub in Alatau.

The park’s general director Nurlan Kopbosynov said its success was related to its convenient location only 30 minutes’ drive from Almaty, the country’s largest business and commercial centre.

“In 2006, there were 28 companies in our innovation park. Today, the number has grown to 167,” he said. “This breakthrough has been achieved thanks to the personal attention of President Nursultan Nazarbayev who is also the chairman of the board of trustees. He made sure the park received the necessary state support of innovation grants and funding to start new businesses.”

The park has two manufacturing complexes to make new high tech products. A subsidiary of Kazakhtelecom is building a new IT centre there. The Oil and Gas Institute, Kazakh-British Technical University, International University of Information Technologies have also started to build new research facilities there.

“One domestic firm is ready to transfer its factory manufacturing fibre lines from Singapore to our park and global companies like LG are planning to move their production here,” Kopbosynov said.

The PIT operates as a special economic zone, where companies are exempt from corporate and property taxes. However, they continue to pay the individual corporate tax, social security tax and value added tax (VAT). In 2012, the companies in the park generated 800 million tenge ($5.30 million) in taxes for the national budget. The state budget has already received more than two billion tenge ($13.24 million) in taxes from companies operating in the park since it was opened.

The PIT is planning to create new design bureaus to promote new engineering ideas. The government has approved innovation grants for the bureaus to be provided on a competitive basis. Engineers working at the park on a trial grant programme in 2012 equipped the entire complex with a new independent energy-efficient lighting system which they now plan to market commercially.

The Special Economic Zone has negotiated memoranda of cooperation with all national technical universities in Almaty to find new ideas from students and young scientists. In 2012, this led to three new patent applications from the International Institute of Information Technologies.

The Damu National Agency for Technological Development Fund and the national science fund both provide financial support for new projects at the park. 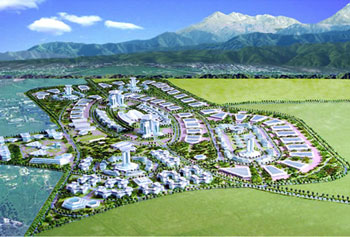 The park is focusing on developing new green, or sustainable, technologies for the EXPO 2017 global exposition in Astana. The construction of the second phase of the Park is planned for the near future, and, according to designers, these buildings will have the elements of “smart home” and “green” technologies. The village of Alatau will also soon be supplied with gas, which in turn will significantly reduce energy costs for producers.

The Ministry of Industry and New Technologies is drafting new legislation to allow the park to rapidly expand. In 2012, the park employed 100 people at an average salary of 100,000 tenge ($660) per month. After its expansion, it is projected to generate 12,000 new jobs.

Nurlan Zhanibekov is the director of ELTEXALAU, which makes telecommunication devices. He told The Astana Times that domestically-produced products in this area are comparable to European and Chinese ones.

“Unfortunately, support for domestic producers is often limited to presentations, exhibitions, and summary reports. But this field requires the study of procurement plans of national companies, analysis of entrepreneurs’ proposals on cooperation and approving contracts to support them,” Zhanibekov said, “If we want to expand our domestic production of high tech products, it will be necessary to take firmer actions.”

Zhanibekov said he had studied the example of South Korea, which he visited this year, in encouraging its high tech and innovative industries. The Seoul government ensures the success of high tech companies by placing regular major orders with them and establishing attractive terms of investment for them, he said.

“I wonder what prevents the representatives of our national companies from demonstrating their patriotism and buying from domestic suppliers?” he asked.

The innovation park at Alatau was founded by the Institute of Nuclear Physics. INP Deputy Director for Research and Methodology, Professor Nasurlla Burtebayev said the institute, which was founded in the Soviet era half a century ago had played a significant role in creating the tradition of high research and development there.

“There is still that scientific atmosphere and aura, for which the town has always been famous,” he said. The creation of the innovation park breathed new life into it. Therefore, it is advisable to keep the status of a scientific centre for the village.”

Today the Institute of Nuclear Physics is still operating at Alatau and employs about 300 scientists. Some of the country’s leading technical universities are planning to launch expansion programmes there.