The last bell has sounded for 143,000 graduates of secondary schools in the country at the end of May. The last bell is a traditional ceremony in the schools of post-Soviet countries. The celebration is carried out just after all the studies are finished, but before the final exams. The date usually falls on May 25. 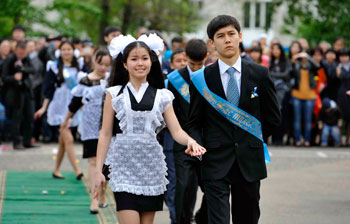 This is an exciting day in all meanings – 11 years of hard but interesting study are behind, and student years are coming soon. But now, the students have to grow up, passing a serious final examination and choosing a profession. In addition to traditional school assemblies, excursions around the school, concerts and various campaigns the graduates saw plenty of entertainment.

ASTANA – Three areas around the city were provided to 3,686 graduates: the area in the square in front of the Ministry of Finance, the Orbit micro district and the area at the fountain in the Park of Lovers. Girls and boys remembered the songs of their childhood, danced waltz, wrote wishes to each other, took photos. Graduates who could be easily recognized by the ceremonial dresses and blue ribbons, and happy smiles, filled the city park with its entertainments and river boats that rolled them with the breeze on the Ishim river. The Triumph ball took place in the Palace of Schoolchildren for winners of international and national competitions, their talented mentors, who won 122 medals for their city in different countries and on different continents. Girls in the snow-white dresses danced with gallant cavaliers at their first ball.

AKMOLA REGION – Concert programmes were prepared, performances were made by the best students, certificates and letters of appreciation were given to outstanding children and, of course, memorable gifts for graduates were given throughout the region on this memorable day. The last bell is not just a holiday, it also the beginning of a difficult and responsible examination time. This year, the region gave knowledge to children in more than 650 schools of various forms of study, 4,634 graduates will receive the first ‘start’ in independent living, including 3,969 boys and girls who were registered for passing the Unified National Testing (UNT), representing 78.5% of the total number of graduates. 208 pupils are claiming ‘Altyn Belgi’ (golden medal upon graduation of school), and 90 are seeking certificates with distinction, which they need to support by excellent grades at the exams.

PAVLODAR REGION – Yerlan Aryn, Akim of the Pavlodar region, came to congratulate the graduates of lyceum No. 10 for gifted children named after Abay with the last bell.

He was not alone, he came with Nobel Prize laureate in Economics Finn Kydland from the U.S., who arrived in the region in order to read lectures for students and teachers of S. Toraigyrov Pavlodar State University. 88,786 students completed their education in the institutions of the region. Among them, 9,768 students (11%) graduated with honors, and 31,972 (36%) with good and excellent marks. The number of applicants for the Certificate of Secondary Education ‘Altyn Belgi’ this year makes 186 pupils, and 82 pupils got certificates with distinction. Congratulating the graduates, the Akim noted that each of the graduates will have to make a responsible step – to choose future profession and to determine future way of living. The state, teachers and parents have done everything to ensure that the younger generation has grown up competent and competitive.

The holiday has finished, and ahead a serious examination will be held. A total of 99,815 graduates across the country have applied to participate in the UNT, which will be held from June 1 to 15. A total of 4,678 students claim to receive ‘Altyn Belgi’.