By Yelena Brusilovskaya in Culture on 29 May 2013

ALMATY – In many ways, Latifa Khodzhikova is a symbolic figure in the Kazakh art. And not just because she was the first female Kazakh professional scene painter, a great expert of national costumes and ornamental art of the Kazakhs, a skilled worker who created fancy yurts and handmade carpets, which were applauded by connoisseurs of art at exhibitions in London, Paris, Moscow and Los Angeles. 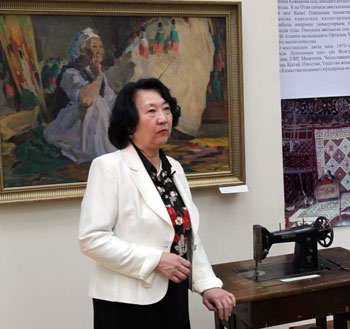 Saule Khodzhikova, the grand daughter of Latifa Khodzhikova speaks at the launch of the exhibition.

She was also the founder of the whole dynasty of artists. She passed on her talent and love for creativity to her four sons, whose works are included in the exhibition of the anniversary exhibition which opened in Almaty in May.

Few people knew this remarkable detail that her elder brother Serali Lapin graduated from the law faculty of St. Petersburg University, where he studied along with Alexander Kerensky, the future head of the Provisional Revolutionary Government.

Before the 1917 revolution, Serali Lapin opened a law office in St. Petersburg, where Lenin’s older brother Alexander Ulyanov worked for some time. Serali Lapin later became interested in science, studying ancient inscriptions of Registan in Samarkand, and published the first Turkish dictionary. In 1919, he died under unknown circumstances.

Serali Lapin played a fateful role in his sister’s life, introducing her to his friend, a young teacher Kongyr-Khoja Khodzhikov, with whom he translated many rare books and oriental manuscripts into Kazakh. Latifa and Kongyr-Khoja fell in love with each other, but they had been betrothed since childhood for others, and they were forced to flee the Perovskiy County.

At first, the young couple lived in poverty, but for Latifa Khodzhikova’s skilled hands, they would have had it very badly. She wove carpets skilfully, sewed, and made patterns from embroidery. She also enjoyed motherhood; sons were born one after another…

In 1921, the Khodzhikovs moved to Tashkent, where Latifa Khodzhikova’s path to professional theatrical art had started. Latifa Khodzhikova not only designed the scene and sewed costumes for “Birzhan and Sara” play, but she also performed the role of Sara’s mother. She had a beautiful voice, knew many Kazakh songs and later she sang to composers. For instance, Eugeniy Brusilovsky used her tunes while writing “Kyz Zhibek”, “Er Targyn” operas and Latifa Khodzhikova participated as costume designer in their direction.

Since the mid-1920s the Khodzhikovs moved to Kzylorda, where the first Kazakh professional theatre opened at that time. Latifa designed costumes for theatrical productions of those years for such plays as “Baybishe-tokal”, “Altyn Sahina”, “Enlik-Kebek”, “Karakoz” and others.

From morning to night, Latifa’s Singer sewing machine was knocking at the house, which also found a place in the exhibition. Saule Khodzhikova said this sewing machine was 150 years old. More than once, it had saved the family from poverty and hunger, as Latifa worked not only for the theatre, but also sewed for all her numerous relatives. In her skilled hands, faceless fabric came alive, turning into beautiful costumes.

Latifa Khodzhikova did not perceive her hard work as a tedious craft. She made everything with love, remaining a welcoming hostess. The Khodzhikovs’ house was always full with guests: it was here that ideas for new plays were born, people that were close in spirit met, folk songs were heard, turning a modest meal into amateurish theatricals.

The current exhibition features a painting by the famous painter Maria Lizogoub, where Latifa-apa is shown in the process of constructing a yurt. It was designated for demonstration for the Decade of Kazakh Art in Moscow in 1958.

As Maria Lizogoub, a Ukranian, wrote in her memoirs, she visited Kazakhstan because of the poems by Zhambyl and the ornamental works by Latifa Khodjikova.

“Latifa-apa treated Maria Lizogoub as her daughter,” Saule Khodjikova recounted, “because she only had sons and she used to say, ‘Maria, be my daughter’. Maria Lizogoub often visited her at home and inconspicuously drew when Latifa was carried away by her work singing to herself at the same time. I remembered how once as a child I started dancing as she sang. And that inspired her to paint a new work, ‘Grandmother and Granddaughter’.”

Latifa Khodzhikova became the protagonist of a documentary film, “Folk Crafts of Kazakhs”, shot back in 1957 by director Abdullah Karsakbayev on the script written of her son Kulakhmet. This film was recognized as one of the best at the international exhibition “EXPO 1967” in Montreal.

Latifa Khodzhikova passed away in 1960. Thanks to the efforts of her son Kulakhmet and others the art section at the Union of Artists of Kazakhstan began its work. Later, Kulakhmet facilitated the creation of the museum of arts and crafts, the main exhibits of which are the pride of the country’s main museum.

“If you want to know what was special in the character of this amazing woman, I would say it was her boundless sense of freedom and love for art, her country and people, which, in spite of everything, she retained until the end of her days,” Saul Khodzhikov emphasized.