HANNOVER – The premier international trade show, Hannover Messe 2013, was held in Hannover, Germany on April 7-12 to highlight the current state of the art in industry, preview key future trends towards integration and open up new prospects for expert dialogue across all aspects of Industry 4.0, one name for the current “fourth industrial revolution.” 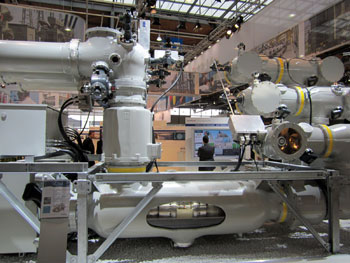 The event is held annually. The first Hannover Messe was held in 1947. Kazakhstan participated in Hannover Messe in 2004. President Nursultan Nazarbayev attended the event. This was the first time when Kazakhstan was represented there.

This year, Russia, the world’s sixth largest economy, was featured as the show’s official Partner Country.

“This Messe partnership comes at just the right time. For at present a Russia Year is taking place in Germany and a Germany Year in Russia. The motto of the series of events in the two countries is “Germany and Russia – shaping the future together.” Hannover Messe 2013 provides an excellent opportunity to give substance to this concept. It enables numerous companies from our two countries to showcase their latest products and technologies, to intensify their cooperation and to make new contacts,” Chancellor Merkel said at the opening ceremony. Speakers also included Federal Minister of Education and Research Professor Johanna Wanka, Lower Saxony Prime Minister Stephan Weil and German Electrical and Electronic Manufacturers’ Association (ZVEI) President Friedhelm Loh.

In his welcoming speech, Loh pointed out that this event served as a showcase for the latest innovations from all sectors of industry, from IT to mechanical engineering and the electrical industry.

“The show is taking place at a very exciting time, a time of revolution in industrial processes. Industry, science and research are gearing up for the next stage in the development of integrated intelligent process structures. Today we are a lot further on in technological terms, and we can rightly speak of the ‘fourth industrial revolution,’ otherwise known as Industry 4.0,” Loh said.

In conclusion, Loh stressed that the Hannover Messe continues to be a source of endless fascination for the simple reason that it opens a window onto our future.

During the opening ceremony of the event, Professor Wanka announced the winner of the Hermes Award, one of the most valuable technology prizes worldwide, which singles out outstanding innovations pioneered by individual companies. This year Bosch Rexroth AG from Lohr, an internationally successful manufacturer of high-tech products, received the award for its Open Core Engineering project.

This year’s Hannover Messe attracted 6,550 exhibitors from 62 nations, highlighting a multitude of innovative products and technology solutions, and provided a vivid showcase for the keynote theme “Integrated Industry.”

The Industrial Automation trade show put the spotlight on integrated automation processes with themes like Embedded Systems and Smart Production. Leading robot manufacturers and system providers organised a “Parade of Robots” to showcase their latest production automation technology and solutions.

The keynote theme of the event was also manifested in many aspects of the Motion Drive & Automation (MDA) trade show, including condition monitoring systems displays. Industrial automation and power transmission and control technologies are steadily converging as the industrial world goes digital. The concept of integrated industry is at the forefront of this trend. The exhibitors at this year’s MDA show focused on efficient and sustainable intelligent integrated system solutions.

The leading-edge technologies displayed by exhibitors at the Energy trade show illustrated their ability to make a real contribution to the global transition in energy systems. Exhibits covered the entire energy industry supply chain, from generation, grid supply, transmission, distribution and storage through to the latest IT and market mechanisms for smart grids.

Wind power is seen as the driving force among the various renewable energy options. Leading manufacturers, subcontractors, logistics specialists and service providers were on hand to present their new concept designs and technologies for on- and off-shore solutions, and they used the international industrial platform provided by Hannover Messe to highlight their skills for the energy transition.

The enormous potential of integrated industry was also abundantly clear at the Digital Factory show, where the spotlight was on process integration and interdisciplinary product development. 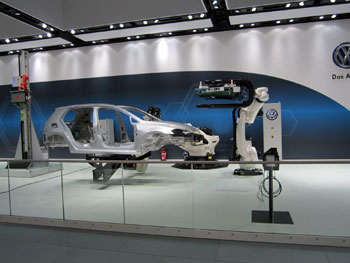 A VW stand showcased the assembly line for its cars.

At the Surface Technology show, exhibitors presented integrated surface systems and the latest innovations in a range of fields, including nanotechnology. In keeping with the “Integrated Industry” theme, the show explored ways in which industrial companies could use surface technology to enhance the energy- and resource-efficiency of their plants and processes.

The exhibitors at IndustrialGreenTec highlighted ways of integrating environmental management systems into existing business models, identifying opportunities for developing new, eco-friendly products and streamlining complex systems and processes. Special attention was given to best-practice examples in terms of resource efficiency and the conservation of natural resources.

The intelligent energy supply was a major highlight at Hannover Messe this year. Due to the holistic view and demonstration from energy generation to consumption, the Smart Grids Forum showed solutions from all point of views in the energy sector.

Information and communication technologies are playing an increasingly important role in automation. Talks and discussions about efficient, fully integrated solutions for customer-oriented applications took place at the Industrial IT Forum. The Night of Innovations event has established itself as a perfect platform at Hannover Messe, where top people from science, industry and the political arena get together and talk about the cutting-edge and innovative technology. Exhibitors from the Research & Technology show invited trade visitors and exhibitors from other trade fairs to experience various fascinating presentations, shows and discussions affording insights into future-focused innovations.

Hannover Messe 2013 drew to a successful close on April 12.

“Over the past several days, the world’s leading trade fair for industrial technology has underscored its role as a key driver of the fourth industrial revolution. The experts all agree that integrated approaches to manufacturing are going to have a sweeping impact on global industry over the next 10 to 15 years, and beyond,” Dr. Köckler of the Managing Board at Deutsche Messe AG said.

“Hannover Messe 2013 has been a resounding success, and has demonstratively underscored its reputation as the world’s No. 1 showcase for innovations. Under the rallying call of ‘Integrated Industry,’ Hannover Messe exhibitors are forging ahead and laying the groundwork for tomorrow’s production reality,” Chairman of the Hannover Messe Exhibitors’ Committee Dietmar Harting said.

Hannover Messe 2013 featured a powerful array of networking events, panel discussions and forums to cultivate and multiply the myriad valuable new business contacts and concrete business deals made at the exhibition stands. Decision makers and investors from around the world attended this event to learn about the latest trends, themes and technologies.

On April 11-12, on a trip to Germany, a Kazakh delegation headed by the First Deputy Governor of the Atyrau region Goumar Duisembayev visited Hannover and Hamburg.

The visit of the delegation was held in the context of the tasks set by President Nursultan Nazarbayev in his Strategy “Kazakhstan 2050”, the main priorities of the 2010-14 State Programme for Accelerated Industrial-Innovative Development, as well as the instructions of the president on the results of his visit to Germany in February 2012.

During his visit to Hannover, Duisembayev met with Mayor Bernd Schtrauch, and visited Hannover Messe 2013.

At the exhibition, the delegation held bilateral meetings and talks with the leaders of a number of leading German and European companies, such as Dena, SMS MEER GmbH, Bilfinger, Vestas, E.ON, BIOPRO etc. The delegation was introduced with the latest achievements in the development of innovation, technology and automation in industry, renewable energy, integrated systems, information and digital technologies.

Following the meetings, the agreements were reached on cooperation in promoting the implementation of universally recognized international standards ICEx, API in the field of oil and gas industry, monitoring and management of quality petroleum products, investment in the industry of conventional and renewable energy, as well as studying the possibility of establishing joint ventures in Kazakhstan.

With a view to the practical implementation of the agreements achieved between the Atyrau Socio-Entrepreneurial Corporation and the B.T. Innovation GmbH Company, a protocol of cooperation on the construction of house-building plant in the Atyrau region was signed. In addition, Gabdin Pipe LLP and SMS MEER GmbH signed a Memorandum of Understanding on implementation of the project “Construction of the plant for the production of longitudinally welded steel pipes” in Atyrau.

In order to benefit from the expertise on the application of high energy-saving technologies, the delegation also visited a number of leading enterprises in Hamburg, the leading of which is an aircraft plant of the Airbus Concern.