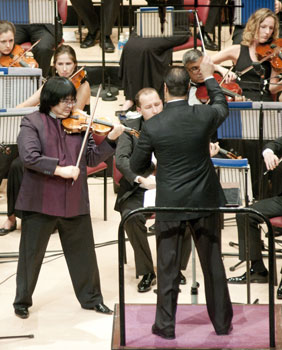 The award was given by the American Elgar Foundation (AEF) for Bisengaliev’s contribution to the heritage of the British composer Sir Edward Elgar.

Kazakhstan’s Ambassador to France Nurlan Danenov, AEF president Sir Richard Winter-Starbridge and artist Ralph Lillford took part in the award ceremony held at the Embassy of Kazakhstan in Paris. Bisengaliev received the ceremonial golden disc and a portrait of Elgar by the Australian painter Ralph Lillford.

Bisengaliev was born in 1962 in western Kazakhstan and made his concert debut at the age of nine. He studied at the Tchaikovsky Conservatoire in Moscow with legendary violinists Boris Belkin and Valery Klimov. He is the father of singer Aruhan Galiev.

Bisengaliev won the 1988 Leipzig International Bach Competition and the 1991 International Nicanor Zabaleta Competition in Spain. In 2000, he received the Platinum Tarlan Award and the Medal of Honour in Kazakhstan.

After the movie “Borat” was released, Bisengaliev commissioned the “Zere” symphony from composer Erran Baron Cohen, the musical director of the movie and the brother of its star, Sacha Baron Cohen.

In 1989, Bisengaliev founded the Kazakh Chamber Orchestra and toured with it as a soloist throughout Europe. His recording of the Mendelssohn concertos with the Northern Sinfonia became Gramophone Critic’s Choice of the year in 1998. Fanfare nominated his recording of the concerto by the British composer Havergal Brian with the BBC Scottish Symphony Orchestra for the 1999 Gramophone Award.

In 2006, Bisengaliev became artistic director of the Symphony Orchestra of India (SOI) in Mumbai.

Working with Khushhroo Suntook, chairman of India’s National Centre for the Performing Arts, Bisengaliev made the SOI a world class body of performers.

Bisengaliev partnered with SOI Music Director and pianist Benjamin Frith in a chamber concert on February 19 and on February 22 performed the Tchaikovsky Violin Concerto.

“People who see me think that I have everything – family, children, career,” Bisengaliev wrote in his memoir “Do …Re….” “Seeing my own life through the eyes of the student I was, it is a dream came true. All has been fulfilled.”

However, Bisengaliev believes that complacency is the enemy of continuing achievement and as a creative artist he must also set out to conquer new goals. “The end of the dream means death,” he wrote.

“If something can be carried out, it is not a dream, it is a plan,” believes Bisengaliev. “I hope the upward line of expanding achievement will be non-stop, even if it is not straight and has its ups and downs. Every achievement should be higher than the previous one. I want to be a man in love with music and life. This is my way.”