AKTAU – Zhanar and Kanat Zhumagaliyev are the happy parents of three: the first daughter weighing 2.1 kg was given the name Mekke, the second was named Medina (1.7 kg) and the boy was named Miras (2 kg). 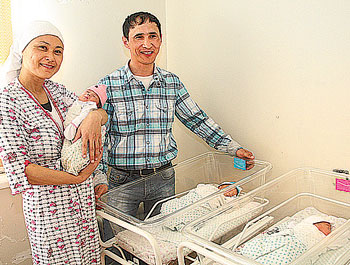 Happy parents Zhanar and Kanat Zhumagaliyev are proud to show their newborn children.

“The childbearing went well. But the babies spent some time in the perinatal center under medical supervision in order for them to grow up a bit and gain weight,” said Aliya Uteulenova, head of the department of second phase nursing at the Mangystau Regional Perinatal Center. The couple had wanted to have children for many years. After many unsuccessful attempts, they decided to take a step and applied to the in-vitro fertilization center in Astana. Soon, Zhanar Zhumagaliyeva learned she was finally pregnant.

“The doctor said that analysis proved that there was not just one child. At first, I was a little embarrassed by the news, but then I was delighted. After all, I may have not one, but two or three small blessings! Doctors offered to remove one embryo, but I refused and decided to give birth to all of them!” said Zhanar Zhumagalieva, mother of the triplets.

“It’s hard to put into words how happy I am. I am insanely grateful that I have such a wife, and such a big family! I received a lot of congratulations from my friends and colleagues who are also happy for me,” said the father, Kanat Zhumagaliyev.

Just recently another set of triples was born: three daughters were born to the Dzhalgasbaev family. The girls were given the names Gaukhar, Kausar and Inkar. They already have an older brother who met the sisters together with the happy father of the family.